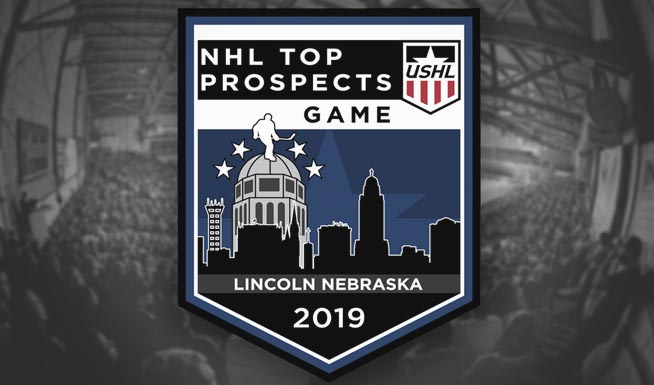 The 2019 USHL/NHL Top Prospects Game took place on January 8, 2019 at the Ice Box in Lincoln, Nebraska, the home rink of the USHL’s Lincoln Stars. It was a hot destination for NHL scouts who were excited to get a peer vs. peer viewing on some of the league’s top talent for the upcoming NHL draft. The two sides were separated into Team West and Team East rosters with eighteen skaters and two goaltenders participating for each side. Team West came away with the 5-3 victory. Below are a few names that impressed us in Lincoln.

Mastrosimone has the offensive flash, and coupled with hard work produces an electrifying skill-set that will keep you on the edge of your seat while he is on the ice at this level. He scored two of his squads three goals and was far and away the top performer on his team this night taking home MVP honors. His quick shot release and pin-point accuracy that allows him to snipe corners was on display here. Not overly fast but is quick and has impressive instincts and high hockey IQ. He is a guy who could go pretty high, higher than where he is ranked due to his offensive skills but also lower due to his current skating stride and strength deficiency.

Firstov is a solidly built and skilled forward who skates at an elite level, is very explosive and really has a lot of power in his stride, making him a real force on the ice. He has good hands and puck skills and makes some really creative plays with the puck and reads the game very quickly. His shot is hard and accurate displaying strong finishing abilities. He competes at a high level and really works for his team. While the results were not conveyed on the score sheet in this game he did impress the NHL scouts in attendance.

Blumel is explosive on the ice and really competes at a high level. He is a team guy, very selfless and possesses natural leadership qualities. He embraces physical play and battles hard along the boards/in corners/in scrums. Has a really hard shot, gets it through traffic, is solid on his skates and shows really nice balance and control. Obvious offensive threat and defensively responsible. Was draft eligible last season and went undrafted but has enjoyed a breakout season this year. Should be a mid-to-late round safe pick who will get plenty of time to develop during his time with the University of Connecticut.

Breen is a smaller two-way forward who displays excellent vision of the ice and really keeps his head on a swivel when possessing the puck looking for distributing options. His offensive game is really effective, he shows top notch offensive instincts and overall, is just a wizard with the puck. He was good at handling the puck in close situations and maintaining possession. His skating is also a strength, he shows impressive speed and balance. Defensively, he holds himself accountable and recognizes his role, he picked up his man and sticks with him until the threat was no longer looming. He scored the other team East goal and was very reliable and consistent with his play in this contest.

Malone was a very late injury replacement add to the West lineup and he did nothing but impress with his ability to jump right in and stand out in a positive light, scoring a goal in the process. His size, strength, skating ability and hard shot were on full display as was his ability to fight through traffic and win 50-50 puck battles. He is a mid-to-late round option who could work his way even higher with a strong last couple months.

Saville showed his athleticism, poise and excellent mobility as he made some outstanding saves in an All-Star type contest that is not geared for protecting goaltenders. His glove hand is amazing and he reads and reacts very quickly. The top USHL puck stopper for the upcoming NHL Draft, not including the NTDP, could be selected higher than many have him currently ranked as there has been some substantial chatter that a few NHL teams are really high on the Alaska native.

A kid who we were not overly sure of going into the contest but impressed us with the heart he shows each shift. Phillips is a small winger that plays like a big man. He is a fast, smooth skating forward that presents a great mind for the game. He isn’t afraid of physical play and will battle for pucks. He really doesn’t let his size hinder his game. The events Co-MVP with Mastrosimone picking up two points in the contest and was constantly buzzing around the puck. He displayed a strong shot that he gets off quickly, which is absolutely vital to playing at the next level. He shows tremendous upside and potential.

Johnson is a mobile, offensive minded defenseman who moves the puck effectively. Not the biggest guy on the ice, and gaining size would benefit him, but size isn’t everything anymore. His hockey sense is his greatest asset. Defensively, he has good instincts and controls gaps well. He didn’t get beat much if at all, and keeps good spacing and knows when to attack the puck. Overall, one of the best defenseman in this game with the high potential.

Pinto is a tough, power forward. He plays with tons of energy and has a very high work ethic. Willing to throw his body around and drop down to block shots which he did both on this night. He battled in the corners and along the walls winning a lot of loose pucks for his squad. Needs to work on his heavier feet but once he gets going his speed is fine. He showed decent hockey sense, controlling the puck well and shooting whenever the opportunity was presented leading to six shots and a goal in this contest. He crashes the net hard, but with control. He made a couple decent plays which shows his skillful imagination.