The 2019 IIHF World Junior Championship was played in Vancouver and Victoria, B.C., from December 26, 2018 through January 5, 2019 and included a handful of prominent 2019 NHL Draft eligible prospects representing their country.

A plucky Finnish squad took home Gold after a couple close and hard fought one goal wins against tournament host Canada in the quarter final and then the Americans in the final seconds of the Gold medal contest. Russia took home the Bronze after narrowly missing the final after being eliminated by the Americans in the semifinals. Both Sweden and Canada disappointed with a fifth and sixth place finishes at this event respectively.

The event featured the top two ranked drafted eligible prospects available for the 2019 NHL Draft as well as a handful of others. 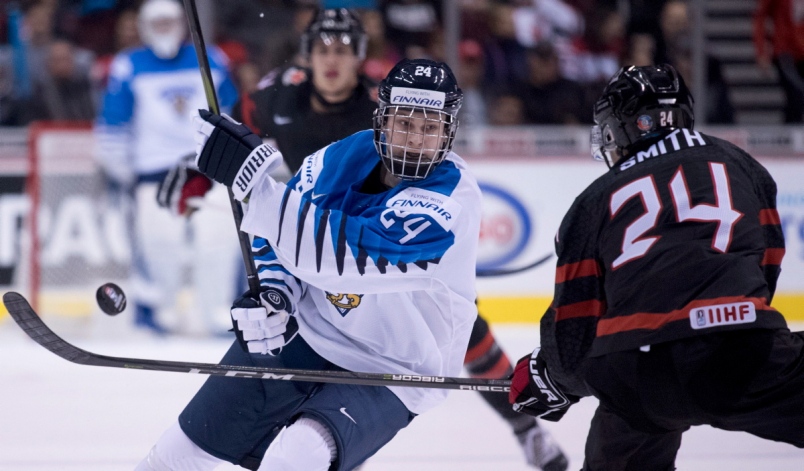 The 2019 World Junior Champion Finns top draft eligible player, the second overall ranked winger Kaapo Kakko (#24 above), contributed five points including the game winning “golden goal” that he shoveled in as time in the final was waning. The power winger who has been dominant so far in his nation’s top men’s league couples skilled hands, puck possession, fierce forchecking and strong offensive awareness was highly effective creating scoring chances for he and his line mates all tournament long. His performance had more than a few NHL executives excited for what he could bring to their franchises as early as next season.

On the backend Ville Heinola was playing on Finland’s top defensive pairing together with Henri Jokiharju until he got hurt in the quarterfinal match against Canada and could not play for the rest of the tournament. Heinola has been one of the biggest risers on draft board after this tournament as he handled himself well. He is a mobile defenseman who has good poise, and solid reads of what each situation calls for.

One prospect from the Finnish squad that, despite winning a gold medal, might have wished he never made the trip to British Columbia was defender Anttoni Honka who was used very sparingly by head coach Jussi Ahokas. He was basically a non-factor where he was not given the chance to show his puck rushing ability, vision and power play abilities after he made some questionable pinches that destroyed the trust his coach had in him.

The drafts top ranked prospect Jack Hughes, a center with of the Americans, had a bit of a disappointing tournament which is crazy to say about a kid who finished at a point-per-game and was a play driver much of the time he was on the ice. However the disappointment was more to do with lack of playing time as his impact was muted by an unspecified injury/sickness that forced him to miss almost half of his team’s games. Still, while he was on the ice he displayed his elite level skating, vision and desire to make a difference that has him still sitting atop the majority of formal draft lists.

Russian winger Vasili Podkolzin started slowly but you could see him earning the respect of head coach Valeri Bragin with his hard work and determination as coach Bragin started utilizing the highly skilled forward more as the tournament progressed. He was his team’s best one-on-one puck battler where he was a warrior on the wall and was able to contribute offensively with quick passes and transitions to offense. He played with emotion and was able to get under the skin of more than a few opponents with his play in BC. He likely solidified his spot as a top five prospect for the 2019 NHL Draft to scouts who were in attendance.

Russia also had a few previously passed over prospects such as slick and elusive winger Kirill Slepets who stood out on sheer amount of scoring chances he generated. In one game he had three breakaway attempts. While small he has rockets for feet when he sees an opportunity, skilled hands and a slick bag of tricks and has developed into a responsible player coming back in coverage as well. Problem is that for anyone who has been following Slepets since he was first NHL draft eligible back in 2007, he tends to go invisible for long stretches and show limited efforts from game to game. Not sure if his strong performance of seven points including five goals will be enough to earn a draft selection in his last year of eligibility. If I were running a team however I would use a late round pick in hopes that I could develop his consistency and add a potential late round gem to my franchise. 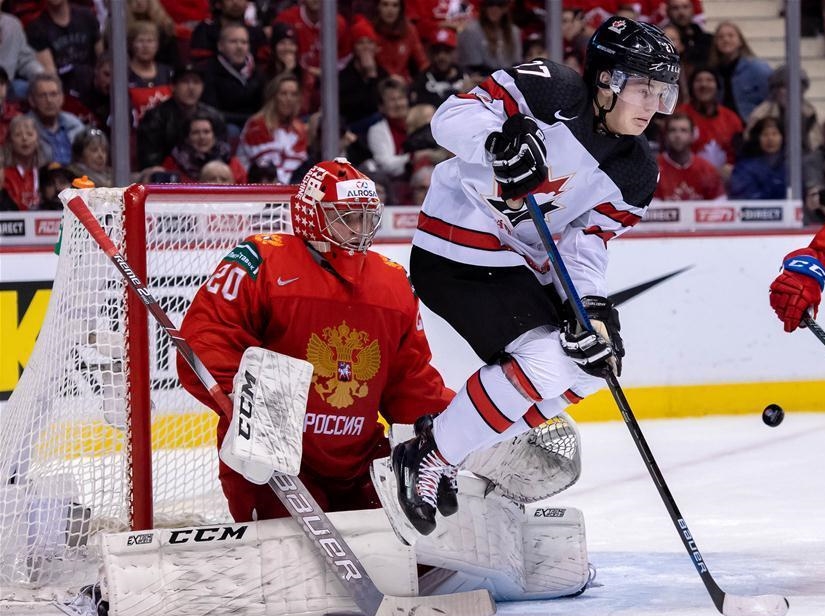 In goal Russian puck stopper Pyotr Kochetkov (#20 above), a 1999 previously passed over in two other NHL drafts, looked like a wall at times with his natural size, flexibility and mobility allowing him to flash a pad or get his body in front of shots at crucial times to keep his team in games. He caught the attention of NHL scouts back in November when he helped Russia beat up on the CHL during the Canada Russia series and carried that performance over to this tournament in BC. The large frame coupled with athleticism will have NHL teams excited and should be enough to have scouts booking a few tickets to see him play again with his club team.

The Swiss finished a surprising fourth after playing some inspired hockey and receiving some timely scoring. Their top draft eligible was Valentin Nussbaumer, a quick, elusive, hardworking and creative playmaker, who crossed the Atlantic in the import draft to join Shawinigan of the Quebec league this season. The 2019 World Junior tournament was just what the talented Swiss center needed as he has been stuck on a bad Cataractes squad where the constant loosing and lack of talent to play with has caused his game and subsequently his draft stock to take a dip over recent months. While he managed only three points, including two goals, at the tournament he was a completely different player than what we have seen in Shawinigan. Looking like a second round prospect who could slip into the tail end of round one for a team that is really high on hm.

Sweden finished in fifth as they lacked scoring depth but had two solid NHL draft prospects on the roster who will likely be big components of this team next year. Winger Samuel Fagemo, whose game utilizes solid speed, soft hands and a dangerous shot, was unable to replicate his offensive success in British Columbia that he has enjoyed in the SHL this season. While it will likely not negatively affect his draft stock it was disappointing for an older prospect not to take advantage of the opportunity to help his nation’s team.

Blue liner Philip Broberg was a late add to the Swedish squad when another defenseman, Toronto Maple Leafs prospect Timothy Liljegren, had to withdraw due to injury. Broberg did a good job playing his game moving the puck up ice, contributing to the offense and defending his zone with his long reach. The strong skating blue liner with offensive instincts was a bottom pairing defender but made the most of his ice time even though he only put up one assist in four games. 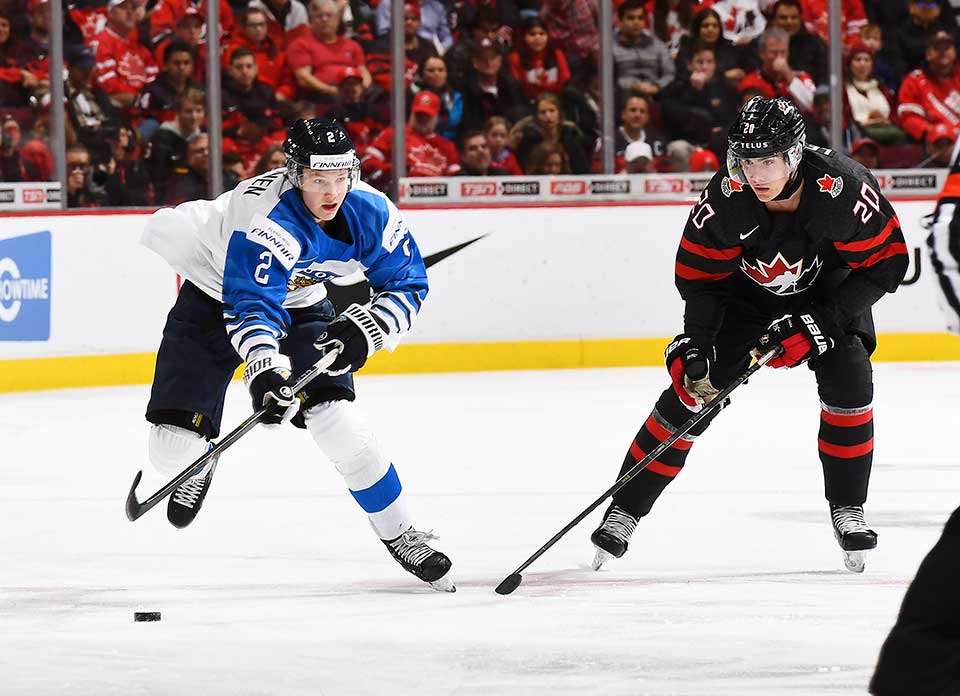 Canada was the biggest disappointment as they failed to make the medal round for the first time when hosting the tournament. However the one 2019 draft eligible prospect on the roster did not disappoint as Brett Leason (#20 above), a power winger with good hands and a strong shot, was a strong contributor. He was able to maintain puck possession, battle for space around the crease and win puck battles all while piling up five points, including three goals, in his five games. We liked him as a second round prospect when we saw him in Prince Albert but now would not be surprised if a team stepped up and used their first round selection on the big kid from Calgary.

Slovakia Goaltender Samuel Hlavaj had his moments both in pre-tournament action and during the tournament as he used his massive frame, surprising athleticism and reflexes to make some amazing saves. He is a big guy who seals off the ice with his pads making an on-ice shot near impossible to score with. He joined the USHL Lincoln Stars after the World Juniors and is someone NHL scouts will want to get out and keep an eye on as the season winds down. We like him as a mid-round prospect for the 2019 draft class.

Kazakhstan defender Valeri Orekhov was a pleasant surprise to us as a smooth skating, puck distributing machine who oozes poise in the face of fore-check pressure. Even though he plays in the KHL he was still a bit of a mystery going into the World Juniors and while his nations entry stood little chance to win a contest due to the level of competition they faced the real win might be that Orekhov had NHL scouts and executives talking about him and whether his plans for the future included the NHL. We like him as a top three round selection if he does not sign an extension with Barys Astana of the KHL.

And finally Denmark finished last and was relegated to the Division 1 Group A tournament while Germany was promoted for next year’s event. The same disappointed can be said of goaltender and draft eligible Mads Sogaard who was shelled in net for an overmatched Danish squad, especially in the first contest against Canada were he let in ten goals before being mercifully pulled in the third period. While he has looked outstanding in his play with Medicine Hat he looked slow and overwhelmed at the World Juniors. Despite the poor showing, his immense size, normally quick reflexes and mobility will keep him in the draft picture, likely in the top three rounds for some NHL franchise.