A REVIEW OF EUROPEAN TEAMS – A 2020 NHL DRAFT PREVIEW 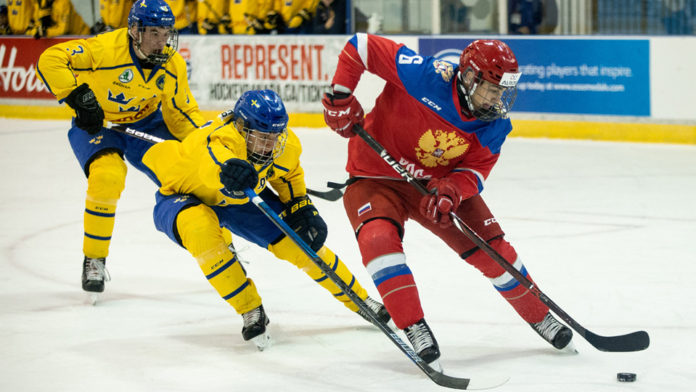 The world’s top U17 hockey talent recently gathered in New Brunswick for a week in early November giving the NHL talent hounds and executives a taste of what to look forward to at the 2020 NHL Draft and beyond.

While top names like Alexis Lafreniere, Justin Barron, Dylan Holloway, Marco Rossi, Noel Gunler, Anton Lundell, Ryder Rolston among others were not participating due to age eligibility there was enough high end talent participating to make this a must see event.

Often the top talent at this event reside on the European rosters that participate and that was the case again this season with Russia winning the championship game against Finland who had to settle for second.

Russia’s Vasili Ponomaryov, a highly skilled fleet-footed center with MHK Krylia Sovetov Moskva of the MHL, finished third in event scoring with four goals and eight points in six games. He demonstrated good offensive instincts and liked to shoot the puck displaying a lightning quick release off his stick. The center has a knack for scoring goals. He is very good at reading plays and anticipating passes, showing a strong work ethic on the ice and performed well with the added space on the power play. He played a very solid two-way game for Russia at this tournament.

Another constant threat for the Russians throughout the tournament was Daniil Gushchin, a winger with Muskegon of the USHL, who displayed incredibly high-end puck skills and deadly speed. He was a constant threat for the Russians throughout the tournament creating a ton of chances by using his powerful skating and going hard to the net. Blessed with exceptional vision and confidence with the puck combined with his ability to score from almost anywhere in the offensive zone in addition to his transitional play make Gushchin a nightmare to try and defend. Gushchin has a smaller frame, but has an all-world compete level and can change the game in a single shift.

Pint sized Russian center Marat Khusnutdinov, playing in Vityaz Podolsk’s junior system, was impressive moving the puck up ice and creating offensive chances including two goals and five points in six games. He is not just a one trick pony however as he battled hard in his own zone and played a reliable two-way game as well. He is super quick and smart with the puck, gets himself to open ice without it, finding open teammates with passes when in possession. Not strong physically on the puck but uses his slippery movement and stick quickness to protect it before making a play.

On the backend Daniil Chayka, currently suiting up with Guelph of the OHL, looked good as a big-bodied, mature defenseman who plays a pro style game. Strong positional play, good gap control and always gave a solid defensive effort. He has a strong skating stride that provides him with good separation from opponents, a cannon of a shot and likes to get the puck on net and demonstrated above-average anticipation and very good decision-making with or without the puck.

Yaroslav Askarov, the mammoth butterfly style stopper who is the top goalie for the 2020 NHL Draft and currently plays in SKA-Varyagi of the MHL, was strong in the Russian crease and a real difference maker for the eventual Gold medal winners. Blessed with impressive natural size, sound positioning and quick reflexes. His puck tracking ability blended with superb mobility and quickness made him near impossible to beat. He is quite possible a NHL first rounder, which is becoming more and more rare these days.

The runner ups, Finland who brought a pretty balanced team also had some solid skill to boast, one in particular we liked was Karpat center Aatu Raty who looks to have the makings of a top center prospect. He is a strong overall skater with a powerful and fluid stride, good agility and a relentless compete level, embodied in his fore checking tenacity and physicality. He made strong decisions, showed solid puck possession skills, liked to shoot the puck, and has a heavy slap shot. He was in our opinion the best player on the Finnish team this tournament.

Their top line center, Roni Hirvonen, who plays in the Blues junior team in Finland is an undersized center who reads the play extremely well and relies on his hockey sense as his go-to trait for making plays. He has high-end vision, a solid top-end speed, excellent agility and above-average acceleration. His overall offensive skillset, when combined with his vision and anticipation, made him a dangerous scoring threat.

On Sweden’s roster there was also some high end talent for the next few NHL drafts, including Frolunda winger Lucas Raymond who displayed his a superb skating with high-end agility and elusiveness. He has fantastic offensive tools and a laser wrist shot which hit twine four times in six games. His shot is hard, accurate, and quick off his blade. His playmaking abilities are also extremely high-end. What makes Raymond such a high player is not just his skillset and tools but excellent hockey IQ and ability to constantly push the pace of play.

Djurgardens winger Alexander Holtz was the other game changer eligible for the 2020 NHL Draft at this event for Sweden. He is a methodical, efficient, high-IQ, shoot-first player with an elite offensive ceiling. His shot is dangerous and likely his top asset. Holtz engages hard, has high top-end speed, and has stellar anticipation. He was able to contribute eight points including four goals for Sweden at this event.

On the backend for the Swedes Helge Grans of Malmo stood out as a rangy defender who played a smart, simple, puck-moving game. He skates fluidly, decision-making was stellar, didn’t take too many risks in the offensive zone, but did contribute by moving the puck with a quick outlet pass. Defensively, He is not noticeable, in a good way, has sound defensive positioning and maintains excellent gap control. He played a safe, simple game.

The puck stopper for the Swedish entry was 2021 NHL Draft top prospect Jesper Wallstedt who looked good but not as dominant here as we have seen him in the past. He still showed his strong upside utilizing his natural size as a blocking style net minder. Efficient in his movements, strong at sealing off the ice and mobility going post-to-post, maintaining focus on the puck and showing solid rebound control but it is his ability to read the play that really makes him special.

The Czech Republic squad had a hard time scoring goals and were overmatched at this event, however, a couple prospects stood out off the roster including HC Litvinov product Jan Mysak. The skilled winger is an excellent skater with stellar acceleration, solid overall elusiveness and is hard to contain. He created several opportunities by gaining the offensive zone and taking the puck hard to the high-danger scoring areas. He combines high compete with a solid offensive skillset including very good passing ability and quick electrifying hands.

The other Czech prospect of note was Pavel Novak of the HC Ceske Budejovice who was one of the few players who consistently created offensive chances for this Czech team. He drove hard to the net and had a very good compete level for winning puck battles and getting pucks on the net. He has strong playmaking abilities, but rather opts to shoot it or drive to the net. He also has good anticipation on the ice, especially when finding open lanes to shoot or pass to teammates.