A REVIEW OF NORTH AMERICAN TEAMS – A 2020 NHL DRAFT PREVIEW 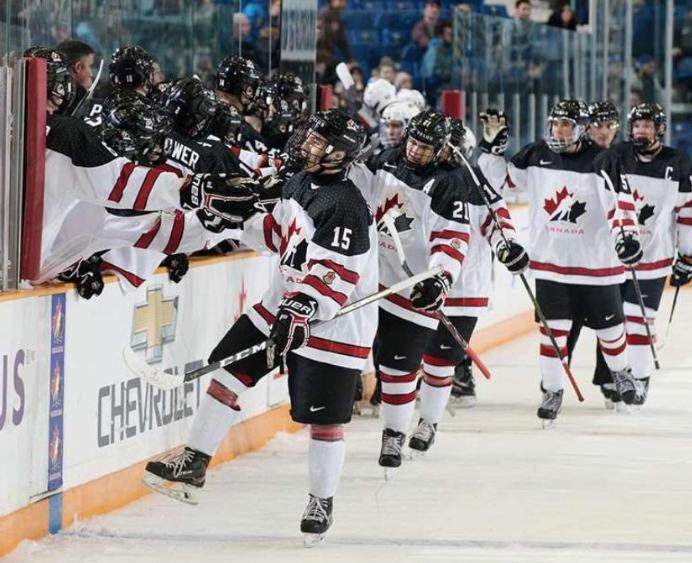 The world’s top U17 hockey talent recently gathered in New Brunswick for a week in early November giving the NHL talent hounds and executives a taste of what to look forward to at the 2020 NHL Draft and beyond.

While top names like Alexis Lafreniere, Justin Barron, Dylan Holloway, Marco Rossi, Noel Gunler, Anton Lundell, Ryder Rolston among others were not participating due to age eligibility there was enough high end talent participating to make this a must see event.

Canada brings three entries to this Hockey Canada sanctioned event as a showcase of the young under seventeen talent across the country and internationally.

One thing was apparent, and that was the potential in Byfield’s game. The name of the game for Byfield is power. His physical tools are off the charts, he thinks the game at a high level, and he has fantastic skating ability. He can transition quickly from defense to offense, cause havoc by charging to the front of the net, or can make a crisp pass to an open teammate. Even though he had a mild case of the flu at the event he still created a number of scoring chances for himself and his linemates.

Jean-Luc Foudy, a center with Windsor of the OHL, is an extremely intelligent, high-end, two-way skater. Playing the wing for Canada Black, Foudy was at his best when he uses his speed, vision, and creativity to dictate the pace of play. He showed an ability to maintain offensive zone pressure as well as demonstrated good reads defensively and good hustle, especially on back-checks.

Foudy’s Windsor teammate, winger Will Cuylle, was also impressive for Canada Black. A big, power forward, scoring winger, Cuylle was a 3rd overall pick in the OHL Priority Selection. He is a powerful skater, deceptively fast and tends to catch opponents off-guard, that has a potential combination of size, skills and speed to dominate on the ice, doing just that during this tournament.

Josh Lawrence, a pint sized center with Saint John of the QMJHL, was impressive for team black as he showed off his quick hands, excellence stick-handling skills and playmaking ability. He combined these traits to make himself an offensive threat every time he touched the ice. Because of his size and strength deficit he tends to stay on the perimeter until he senses a potential opening where he draws a defender in and then torches around them getting himself into scoring positon.

Jamie Drysdale of Erie in the OHL, an intelligent puck-moving defenseman with excellent skating, was arguably the top defenseman on team black and their captain. His awareness with and without the puck was prevalent and he demonstrated very good decision-making. He also displayed excellent passing skills, consistently putting pucks on the tape of his teammates. He has excellent composure while handling the puck and used his feet to open shooting and passing lanes. On the rare mistake, He showed excellent compete and hustled back to mitigate whatever risk had been created by the error.

Over on Canada Red, who ended up losing in the third place game, Portland winger Seth Jarvis stood out with a great two-way performance in this tournament. He has a nonstop motor and is extremely elusive in his skating, using his speed and anticipation well to affect play in all three zones. Despite his abilities to make highlight-reel plays with the puck while at top speed, Jarvis plays the game the right way and doesn’t take any shifts off. He is a shoot-first type player who pushes the pace of play whenever he’s on the ice.

Another premier talent, Kaiden Guhle of Prince Albert in the WHL is a big, mobile, two-way defenseman who set the tone with brutal physicality and compete level for Canada Red. He showed no respect for anybody in the corners or in front of the net; just a real throwback prototypical defenseman.

He displayed some good stick skills, high hockey IQ, and extremely high-end compete level along with the ability to distribute crisp and accurate passes. Defensively sound, he likes to hit and take away lanes for opponents, and he has the mobility to keep up with faster forwards. This complete package looks to have all the tools of a top-end two-way defenseman at the NHL level and was one of the best defensemen in this tournament, cementing himself as a premier talent for the 2020 draft.

One other blue liner on Canada Red who really stood out was William Villeneuve of Saint John in the QMJHL. He is a rangy, smart, mobile, smooth-skating defenseman with good stickhandling skills, is very effective defending one-on-one situations and is extremely dependable all-around in his defensive zone. He contributed four assists in his six contests but was even more involved than those numbers indicate. While he has a ways to go in his physical development he should be one on everyone’s watch list.

Over on Canada White the tournaments leading scorer Connor McClennon, a playmaking right winger with Kootenay in the WHL, opened a lot of eyes with his strong offensive performance. His anticipation, ability to read the play, stood out along with his skating, high-end offensive skills and overall IQ on the ice. He was highly involved and led the tournament in scoring with eleven points including eight goals in just five games.

McClennon’s teammate Cole Perfetti, a center with Saginaw of the OHL, also shined in this tournament with his intelligent decision making. His vision, compete level, faceoff acumen, puck protection skills and ability to consistently get into proper position both with and without the puck in the offensive zone allowed him to be a consistent offensive threat on the ice and make those he was playing with better.

Already touted as the best Swiss prospect since Nico Hischier, Theo Rochette a center with Chicoutimi in the QMJHL, decided to play for Canada White at the tournament, being a dual citizen of Canada and Switzerland. He is agile, nimble, and slippery when he has possession of the puck. Very good at reading plays in all three zones and is able to create turnovers with that in combination with an active stick. He has excellent on-ice vision, skilled hands allow him to possess the puck and make some stellar passes.

A speedy center playing with Tri-City of the WHL, Colby Ambrosio’s game is all about speed. He displays some high-end playmaking ability and goal-scoring ability that all stem from his effortless and powerful skating stride. He keeps his head on a swivel and is able to survey the ice to ensure that he makes the right play. He uses his skill, speed, and energy to push the pace of play.

On the backend, Jeremie Poirier of Saint John in the QMJHL, stood out as an offensive defenseman with excellent mobility and stickhandling ability. He is very well-suited to quarterback a power play with his mobility, vision, stickhandling, and quick shot release and it showed for team White.

The entry from below the 49th parallel did not fair too well winning only once in five games. However the U.S. National Team Development Programs U17 squad did have three names that stood out.

Big center Dylan Peterson was a dangerous player whenever he stepped on the ice. An excellent skater that widens his stance when at top speed to lower his center of gravity. His speed, reach, and size make him very difficult to contain. He likes to go wide around defenders and plays mostly a pass-first game. Peterson was the top scorer for a not very offensive USA squad this tournament.

Big, physical blue liner Tyler Kleven played a strong two-way game and was effective in all three zones. He is a gifted skater and has a long, fluid stride with excellent agility. He has a long reach with his stick, making him even more difficult to go against one-on-one. His point shot is exceptionally strong and he runs a good power play. He brings a combination of size, skating, physicality, and overall athleticism that makes him a threat in all three zones of the ice.

Speedy center Ty Smilanic played significant time centering the top line for Team USA this tournament. He has excellent overall mobility, skating mechanics, and top speed. He used his speed and acceleration all over the ice, mostly through the neutral zone but also pressuring opponents with the puck in his defensive zone. He has fantastic vision to anticipate plays happening and his ability to shoot the puck quickly can catch opponents off guard. He liked to cross through the neutral zone when he has possession of the puck so he can gain the offensive zone with more speed. He had an excellent two-way game this tournament.