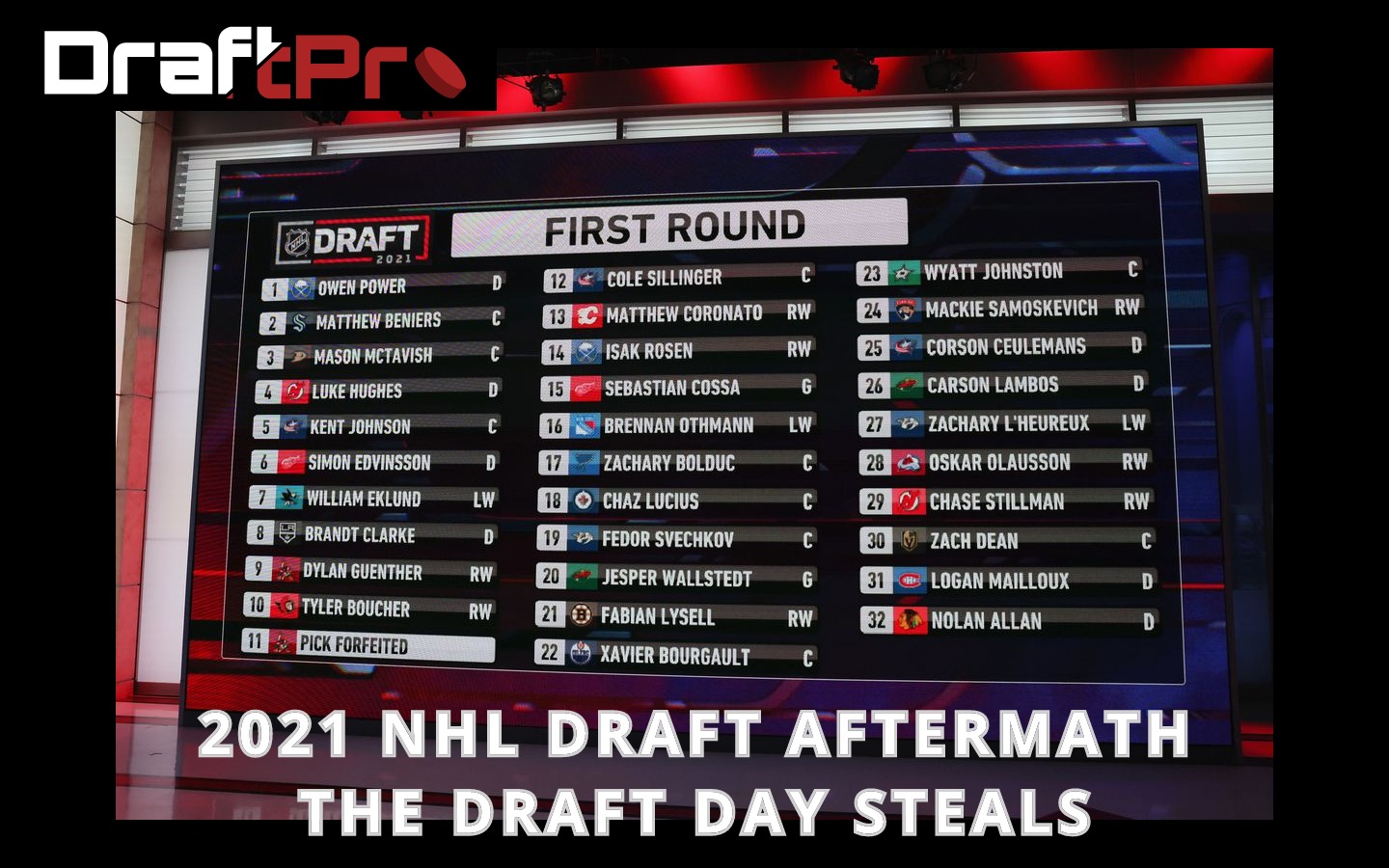 In part one Draft Prospects Hockey Head Scout Jared Brown looked at those who we at DraftPro had ranked inside our top 224 for the 2021 NHL Draft but for one reason or another were not selected. In this second part of the Aftermath series Scouting Director Dan Stewart looks at ten prospects who were selected considerably lower then where we had them ranked but we feel will eventually become excellent value picks, especially when you consider where they were picked up by their NHL teams.

We get it, he is tiny. But we have seen this script play out before. Smaller skilled prospect drops in the draft, gets picked a round or two later then projected, and in a few years is pilling up points in the NHL. Explosive skater, plays with no fear, big heart, offensively relentless, drives the net, has a deadly quick shot, one-time is a weapon, strong lower body so is not easily knocked off pucks, likes to play through contact, quick and tricky on the forecheck, sees the ice well and makes strong passes. Really brings us Brayden Point/Theo Fluery type vibes.

We were surprised this skilled, offensive play driving winger fell out of the first-round, but we can kind of see why as he is smaller, has some individualistic play at times and is Russian. But still we liked him in the second half of the first round due to his dynamic offensive talent and creativity. After a couple season of KHL action we can see his stock skyrocketing and NHL GM’s wishing they pulled the trigger on this talented winger before he fell in the laps of the Jets later in round two.

Originally thought as one of the 2021 Drafts top talents in his DY-1 season, Raty had a terrible start to his draft year (DY) and soon found himself tumbling down draft lists. He lacked confidence and it showed on the ice. He was left off the Finnish World Juniors team after being a key piece in his DY-1 and demoted to the junior ranks from Karpat’s men’s Liiga team. As the season progressed however, he started to again show the game that had him in consideration for the top of the draft a year earlier. He is a hard working, two-way centerman, skates well getting up and down the ice and flashes some high-end offensive tools. Actually the week of the draft he was in Plymouth Michigan representing Finland at the 2021 World Junior Summer Showcase and destroying competition by putting up fourteen points in just six matches against some of the worlds best in his peer group. His later selection might end up the biggest oversight to come out of this draft class.

Again, another prospect likely passes over by numerous NHL teams until the end of round two due to his lack of size but make no mistake Colorado got a gamer here. Fluid, fleet-footed skater, quick laterally, high-end mobility, can push the pace and drive the attack, dangerous in transition, controls the puck with skilled hands. He plays much bigger than the five-foot-ten size, contributes both offensively and plays a smart defensive game as well. He even brings the physical with well timed hip checks and using his low center of gravity to battle for pucks. You might think NHL teams would have got the memo on the quick, average sized puck moving blueliners, but these types of prospects always seem to be available later than they should be year after year. Colorado can let this potential top four develop slowly at the University of Denver.

For a potential top line NHL scorer to drop into the third round like Pastujov did, there had to be a red flag raised in numerous NHL team scouting meetings. We asked around but there did not seem to be any character flaws so what could it be? Does he have a good shot? Yes, he does. Silky hands, check. Smarts, check. Skating…well here is where some improvements need to be made as he struggles with foot speed. The thing is if he improves his skating just a bit he has so many other skills that he could end up as one of the top scorers from this draft class…and Anaheim picked him up in the third round. Put that up upside against say Chicago picking Nolan Allen, a projected bottom four defensive defenseman, with their first-round selection and it leaves you scratching your head a bit.

While not a offensively flashy, puck wizard type of prospect Salminen being nabbed by New Jersey in the third is extremely high value as he projects to be a solid second or third line two-way NHL center with good size and a high work ethic. Potential is there for a captain as well due to his on-ice leadership and trust from his coaches. Plays heavy but can also dance with the puck. Engages physically and wins most of his puck battles. Strong playmaker and can also fire the puck. A high value pick in the third round.

Here is one prospect we figured would fall from where we had him ranked considering the risk associated with his size and willingness to play in the greasy areas and take abuse in front of the net. But we feel his meat and potatoes style plus solid offensive skills and hockey sense that will allow him to be a difference maker for a bottom six role down the road. The Wings hope his offensive game continues to develop over the next couple of years and makes that projection even rosier.

Tampa found a good one here with this pick, later than many independent services would have imagined the Strongsville, Ohio native would have gone. The feisty winger brings grit and a strong work ethic plus middle six type offensive skills to the Lightning. Worse case scenario is he becomes a sparkplug fourth liner who becomes a PK staple for years on a cap friendly contract.

Small but electric. His feet are unbelievably fast, and his quickness is elite. He matches speed with a quick mind and unbelievable work ethic. Now we get it, a five-foot-seven or five-foot-eight center will have to overcome some size/strength hurdles to make it to the NHL but with his wiliness to play in the dirty areas, compete and flash offensive creativity we are betting he makes it. And not only makes it but adds some much-needed secondary scoring to the Hurricanes organization three or four seasons down the road.

Anytime you can add a goal scorer in the draft it is wise to do so. With your last pick in the draft it should be automatic. This two-way defender holds the record for most goals scored by an US NTDP defenseman, a program that has seen some elite defenseman talent come through over the years. With a booming point shot he is never shy to get pucks on the net, and he could be a powerplay weapon that TV announcers will love to say was a seventh-round pick of the Bruins for years to come.