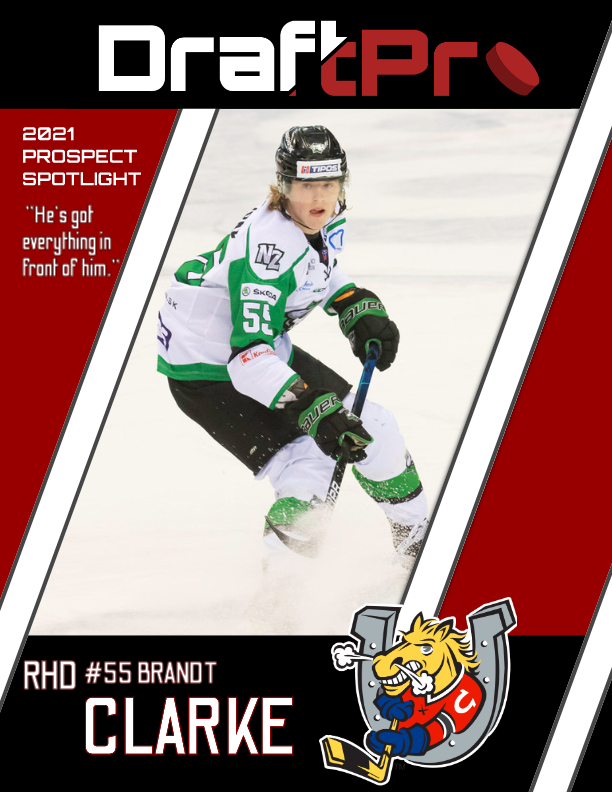 “When you’ve got IQ like he has and you’ve got wonderful gifts of skating and innovation and stuff like that, he’ll keep working on the shot to get that a little bit better, but it’s all there. He’s got everything in front of him.”

The Barrie Colts made sure to temper their expectations with top 2021 NHL Draft prospect Brandt Clarke in the 2019-20 season. The talented defenseman, who began the season a mere 16 years old, was given a small role so that he could adjust to the league and playing against better competition. After all, even though Clarke exploded for 113 points (35G, 78A) in his Minor Midget year with the Flyers, he was starting afresh in a new league. However, by the midway point of the season, the Colts’ plan had turned on his head; in a season where the Colts were out of the playoff picture, they sold off assets to prioritize development. Clarke had forced their hand, and with him leading all rookie defensemen in points, they had no other option than to let him take charge.

Prior to lacing up his skates for the Colts, Clarke was no stranger to the spotlight. Back in his final year with the Flyers, Clarke was instrumental in leading the team to an OHL Cup win. With just over a minute-and-a-half left in overtime with the game deadlocked at 5-5, Clarke launched a stretch pass down the ice to 2022 top prospect Shane Wright to spark a two-on-one with winger Brennan Othmann who, sure enough, potted the feed from Wright to clinch the championship.

“It was such an iconic moment scoring that goal,” said Othmann when asked about the play. “It was a great little play that Clarkey made, Shane made a great pass over, and I put it in the back of the net.”

Clarke is among a group of prospects in the running to be selected with the first overall pick in the draft. Despite his youth last season, his poise stood out to Colt’s general manager Marty Williamson, who noted his continual improvement throughout the year.

“Well, he was a young guy last year and we had a pretty good team,” said Williamson. “He’s got great qualities. And, you know, as a young guy, he stepped right in and he understood not so much his role, but he understood the development in the league. I just thought as the season went on, he kept getting better and better and better. You know, that’s the sign of a real smart player, when you can keep improving like that. He had no problem playing against the older guys. We put him into a lot of tough situations, and he was able to handle it really well. So, you know, he carries himself. He wants to be a pro and he trains like it and he practices like it. As he keeps developing his body and, you know, not being the youngest guy in the league and stuff like that, he’s going to be dominant.”

That Clarke produced like he did last year despite his small role makes his season even more impressive. Williamson hasn’t taken that for granted and thinks Clarke will only continue to impress.

“I think that when the age group catches up, you know, he’s going to really be able to show that he’s one of the best players in the world,” Williamson said. “For him to still contribute when he got very little powerplay minutes, you know, he was still generating offense for us. It’s not like his ice-time was short, it’s just that [he wasn’t used on] the powerplay as much until the second half [of the season]. We just didn’t want to put too much on him too early, but he wanted it. You could tell that he wanted that power play. You know, he’s going to put up some huge numbers the next couple of years.”

Williamson has certainly had a lot of experience coaching in the OHL, and Clarke flourishing with his larger role late last season reminded him of a former player: Ryan Strome.

“Yeah, you know, I’ve seen this with a lot of players,” said Williamson. “Ryan Strome comes to mind who had a small role at the beginning and when his role got increased, he was able to really take off. And sometimes it’s a blessing in disguise that they’re not thrown into that role right away; they’re allowed to kind of get their feet wet, you know, kind of watch and get used to everything. And then all of a sudden, when we decided to move a bunch of guys and go a little younger and strictly be about our development for this year and next year where we think we can be a dominant team, it fit perfectly with him. He was ready for that bigger role and he really started doing some good work on the powerplay.”

Clarke’s strong year with the Colts of course came to an end with the OHL suspending their season amidst the coronavirus pandemic. However, with the OHL still yet to begin their next season, he and his brother, Graeme, flew over to Slovakia to play for HC Nové Zámky. Clarke picked up right where he left off, notching 15 points (5G, 10A) in 26 games playing against men in the Slovak Extraliga.

“Brandt’s playing a top-two role for us and he’s probably got the most ice-time of defensemen,” said HC Nové Zámky coach Gergely Majoross. “We’ve used him in a lot of different roles and he’s one of the first defensemen out in any situation. He’s been handling it pretty well, especially for a young man; you wouldn’t expect a 17-year-old to be such a mature player. Surprisingly, it’s not only that he’s got all the tools and the size and everything, but he’s also a smart player who understands the game and understands what decisions need to be made in certain situations.”

The spotlight followed Clarke to Slovakia, with Majoross noting the attention that his star defender got across the country.

“There’s definitely a lot of attention around him in Slovakia and he handles it very well. Again, for a 17-year-old, I think it could be a distraction that there’s too much attention on him, but he’s handled it very well. In our locker room, he’s always a positive guy, trying his best in every situation. Sometimes he gets super excited for certain things, but that’s OK. I can only speak very highly about him; he’s an outstanding person and a very special hockey player. We feel very lucky that he’s part of our team now, and I think for any coach, it’s an honor to work with a prospect like him.”

Earlier this week, it was announced that Clarke would be returning from Slovakia. He ended his stint with HC Nové Zámky on a five-game point streak, racking up eight points. Majoross and the team will certainly miss the talented blue-liner.

Majoross points to Clarke’s poise on the ice and attitude as some of his biggest strengths. The youngster never gets fazed, always makes the right decisions under pressure, and constantly looks to improve.

“I think his biggest strength is that he’s very composed with the puck,” said Majoross. “He never throws the puck away. At the same time, he doesn’t get in trouble. When he needs to make the simple play, he’ll do that, but every single time he can, he’s going to do something unexpected to make a big impact. I think it’s a great quality for any player, especially for a 17-year-old defenseman playing against men in one of the better leagues in Europe.”

“I would say his attitude is [another strength of his]. He’s a hardworking player. He knows what he wants and where he wants to get, and he’s working hard for that. He’s running one of our powerplay units, and we’ve been talking about this and he’s moving ahead and he’s going to take more shots. For example, last night he did, and he scored on the powerplay for us, which is great. He’s got to continue to grow that way and work on his shooting and start using it more.”

For Williamson, Clarke’s hockey sense and competitive nature are difference makers that are vital to the young defender’s success.

“His hockey IQ is just outstanding,” said Williamson. “He just knows where everybody is on the ice. He’s got a real competitive spirit. You know, there isn’t a ton of weaknesses to his game. A lot of people said [that he could improve] defensively, but we were putting him out there against 19- and 20-year-old first round picks to the NHL — Quinton Byfield and guys like that — and he did real well. Obviously, when you’re that young, there’s still some development in your body. I know he’s already grown another inch and he’s added 10 pounds of strength. That’s going to allow him to really take off in the next year — hopefully this year. His progression has been outstanding that way. You know, again, it is just time that he needs, that’s it. When you’ve got IQ like he has and you’ve got wonderful gifts of skating and innovation and stuff like that, he’ll keep working on the shot to get that a little bit better, but it’s all there. He’s got everything in front of him.”

The Colts general manager isn’t afraid to compare Clarke to some of the star defenders in the NHL today. In particular, he sees a lot of similarities with a former player of his, Vegas Golden Knight Alex Pietrangelo.

“I coached Alex Pietrangelo,” Williamson said, “and I was just amazed by his IQ and his passing ability and how he had a complete game. You know, there could be similarities that way. I think sometimes Brandt likes to hang on to the puck a little bit more maybe than Alex did, but, you know, there are lot of similarities: great leaders, great people, and great teammates. Alex was all three of those things and I see the same thing for Brandt going forward. You hate to put those lofty goals on him but, you know, I think he wants those kinds of comparisons and I think he’s earned them.”

Much like Pietrangelo, Clarke has a complete game, able to excel both with the puck and without it. Put simply, he doesn’t have many holes in his game, and Williamson knows that he can count on the talented prospect in any situation.

“I think that’s what really separates the star players,” said Williamson. “I mean, the game has got so fast and so good that if you’re one dimensional and you can only create offense and you’ve got a hole [in your game], other teams will exploit that. When you could be as well rounded as he is, it’s what makes scouts and agents and management so excited about him; he cares as much as one-on-one battles and committing to the little details as he does making that big pass to set somebody up for a goal. That’s when you really start to know you’ve got some pretty special here.”