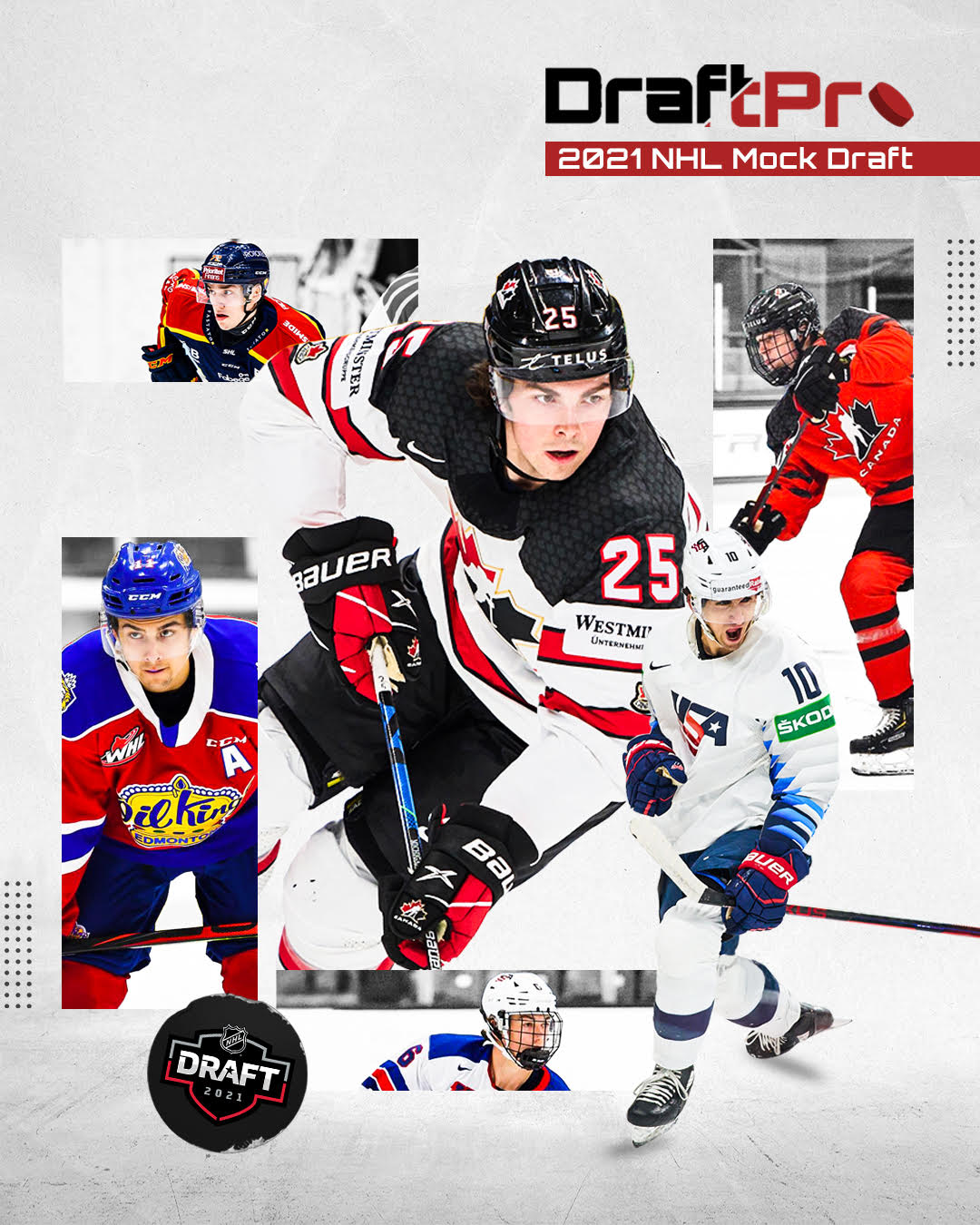 So, the first round of the 2021 NHL Draft is just hours away and many are excited to see which of these young men join an NHL organization where let’s face it, the real work starts. If history is any indication, a handful of these prospects will go on to have long and even championship worthy careers in the NHL. The 2021 draft will be held virtually again just as it was in 2020 with no chorus of boos raining down on Commissioner Gary Bettman, not photo ops with the scouts, GM’s and prospects on the big stage and no draft floor trade talk to get excited about. But there is hope on the horizon as we expect to see hockey again this fall in junior rinks as well as NHL arenas and be congregated in Montreal for the 2022 draft as the world gets back to normal, or close to.

So without further ado, enjoy the draft everyone!

Here is our final mock draft take and who we see going where in the first round of selections.

NOTES: The Sabres surprise many with this pick not named Owen Power, but the organization loves the work ethic, character and positional fit that Beniers brings especially with the uncertainty of the forward corps in Sabre land.

NOTES: With Beniers surprisingly the top pick of Buffalo, the Kraken are excited to add this big two-way defenseman that they hope will be a staple on the young franchises NHL blueline for the next fifteen years.

NOTES: The big news is that the Devils do not pick Luke Hughes or Brandt Clarke with this pick but instead go with their team list BPA. Eklund adds more skill to a young and talented forward group that already includes Hughes, Hischier, and Holtz among others.

NOTES: The Jackets need prospect help coming at both the defense and center positions and feel that Edvinsson, while still likely a year or two, away gives them the best bet at a difference maker both soon and down the road.

NOTES: Yes, most think Detroit will go with either a center or goaltender, both needs to address in the organization, but Yzerman and Draper have different plans as they continue to build a formidable future blueline. Both McTavish and Wallstedt were on the shortlist if Hughes, Edvinsson and Power were gone.

NOTES: San Jose could use prospect help at defense, but arguably the biggest organization need is stability between the pipes and they count themselves lucky that Wallstedt is there for the taking when their turn to pick comes up.

NOTES: Los Angeles is ecstatic to pick up a blueliner, an area of organizational need, as well as the super intelligent, super savvy Clarke being the BPA on their list with this pick. They have a ton of forward prospects in the system and now a stud defenseman prospect to add to the rebuild.

NOTES: This is one that most saw coming a mile away. They need skill and KJ fits. The draft slot they have, the type of prospect they need and who will likely be available, and they could have mailed this selection in a week before the draft. They debate between McTavish and Johnson but ultimately believe the upside is higher with the young Wolverine.

NOTES: The Sens are at the point in the rebuild that they just take BPA with very little thought about organizational depth. They are shocked McTavish is still here at #10 and love the drive, the character, and the leadership they are getting in this hard-working, goal scoring center.

NOTES: Chicago surprises some with this pick as they used a second-round selection on NTDP stopper Drew Commesso last season, and also signed big Swede Arvid Soderblom this season, while already having a 26-year-old Kevin Lankinen in Chicago, but with what is on the board Cossa is their pick and someone they see as their future No. 1 for many years.

NOTES: Tod Button and gang jump at the chance to add this potential NHL goal scorer. His father is Mike “Suitcase” Sillinger who played with a dozen NHL teams in his seventeen-season career. While we doubt he will match his father’s trade record, he was traded nine times in his career hence the nickname, the Flames see the younger Sillinger far exceeding his father’s offensive numbers at the NHL level.

NOTES: Most think center is the pick but Flyers brass make the move to add this skilled winger to the organization. They love his dynamic skill and creativity, and feel the consistency and maturity issues that some question will sort itself out as he continues to develop and grow further.

NOTES: Dallas needs offensive talent at the forward position and add that with this pick that has a bit of a sleeper feel. Lucius was limited to just thirteen games and missed the U18’s due to injury this season but in those games he proved to Jim Nill that he has NHL goal scoring upside.

NOTES: Raty falls into maybe the perfect situation for both him and the team making the selection. If no trade for NHL ready talent is there for the Rangers brass, they would love to grab this two-way potential third line center that they will let take his time to get to the NHL level. They also look at Fedor Svechkov with this pick.

NOTES: St. Louis has some contender problems as their pipeline is not as overflowing as it once was and this playmaking center would help as he projects to a middle six role playing a two-way game but also adding offensive contributions. They also look to wingers Othmann and Coronato before settling on this selection.

NOTES: After picking up a high-end forward last season in Perfetti the Jets are thrilled to add a high-end prospect to the blueline stable with this pick and are overjoyed to add Lambos who they had ranked much higher than 17th.

NOTES: Nashville is in a bit of a retool phase and add a skilled goal scoring center here who can also add a bit of chippy play to the mix. The Preds picking this late in the first round do not expect their first pick to jump right in, and that is a good idea as Othmann looks to come back to the OHL and have a dominant offensive season for Flint.

NOTES: Edmonton tries to trade this pick for NHL help but with no takers, and no top goaltender on the board, they make the selection of the hard-working, offensively crafty Coronato who they see as a solid secondary scoring support in a middle six role two or three years from now.

NOTES: The Bruins are a team that needs prospects coming at every position and take who they see as the BPA in big, puck moving rearguard Corson Ceulemans. They love the offensive upside and skating ability this right shooting prospect brings to the table.

NOTES: The Wild strictly go with who they see as BPA with this selection even though they have just selected a couple high end center prospects in the previous draft. They also look at skilled winger Nikita Chibrikov but ultimately go with their top ranked prospect.

NOTE: Detroit is excited to add this offensive minded, two-way capable center, an organizational need after their first pick of highly skilled defenseman Luke Hughes. The skating is a work in progress but the unteachables like vision and creativity are the draw.

NOTES: The Panthers love the performance they saw from Nikita Chibrikov at the U18’s in Texas from this skilled winger and have no problems taking prospects early that other teams might drop a little for any reason. They feel they might have hit a homerun with this selection.

NOTES: The Blue Jackets are in a retool, and after nabbing the big puck rushing Edvinsson with their first pick they get a strong offensive winger here in Isak Rosen who they feel might only be a season away from contributing at the NHL level.

NOTES: The Minnesota prospect pipeline has some solid young forwards marinating but is shallow on defensive prospects, and this selection of a big, physical, defense-first rearguard such as Daniil Chayka with top four upside is just the recipe.

NOTES: The Hurricanes’ add to their cupboard with the selection of this skilled Kitchener Rangers center. With Francesco Pinelli Carolina brass feel his offensive upside is higher than anyone left on the board but also that he is a safer pick to play even if not in a top six role.

NOTES: The Avalanche are looking for an offensive forward and where they are picking there are no sure things, so they go with the winger that has a high upside and bank that his feet will improve. They also look at Samu Salminen, Samu Tuomaala and William Stromgren with this pick but think Pastujov is the highest skill prospects left available.

NOTES: With their second first round selection the Devils pick this highly effective power winger to help add some size to a young talent pool that is on the smaller side, minus big Nolan Foote. Olausson brings a competitive, hard-working game but also has a heavy shot to put up some goals and play top six minutes.

NOTES: The Golden Knights have depleted a once bulging prospect cupboard with trades to build a playoff contender so they like the offensive promise a longer-term prospect like playmaking and goal scoring winger Alexander Kisakov brings.

NOTES: Montreal after a surprise run in the playoffs to the finals where they showed grit and determination, make their first selection in that mold as they nab this competitive, physical, nasty, power center who will go through a wall for his team. Doesn’t hurt that he is a French Canadian either.

NOTES: The Blue Jackets finish off the first round with their third pick and scoop up this goal scoring winger who they absolutely fell in love with during U20 play with Karpat and again at the U18’s in Texas and see as a potential powerplay triggerman at the NHL level.

We hope you enjoy the draft and if you have not yet give our Draft Simulator a spin. https://draftprospectshockey.com/draftsim/#/

Draft Prospects Hockey digital publications at 30% off this week. Print editions are 20% off as well.