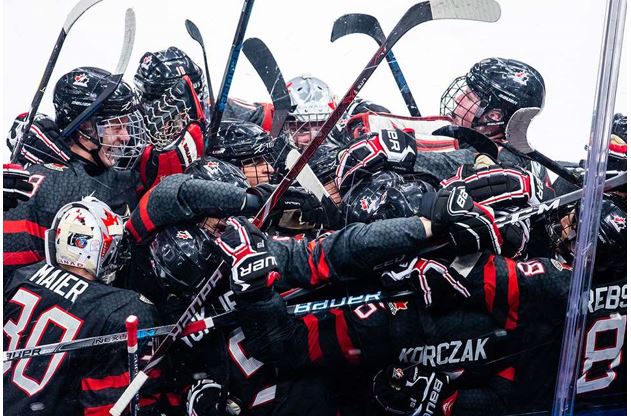 After some competitive practices and scrimmages at the Canadian U18 camp, a team was formed and completed in the inaugural Hlinka Gretzky U18 Cup against some of the world’s top hockey nations.

Surprisingly one projected 2019 NHL Draft first round prospect was cut from the squad in BCHL center Alex Newhook. Newhook’s absence was less about his talent level and more a numbers game as this team was built less like an all-star squad and more like a pro team that utilized three scoring lines and a checking line on route to winning Gold.

Here are some thoughts from the event.

This big and fast two-way workhorse really opened up eyes with his hustle and skill that was on display whenever his blades touched the ice at the Hlinka Gretzky Cup. He was clutch, played just as well in his own zone as in the offensive zone and was strong in and around the slot area forcing teams to pay him plenty of attention, opening up space for his line mates. He has pushed himself into top three contention on many teams’ rankings as guys with his size, speed, work ethic and skillset don’t come along every year.

Speaking of clutch, this Canada winger brought timely goals and multiple scoring chances. He impressed with his speed down the wing, ability to get himself into position and utilizing his quick shot release to make a difference on the score sheet. After being knocked out of the lineup with a broken collarbone last season and missing some games for Medicine Hat, this competitive winger put himself on the map for scouts after this performance.

This playmaking center was outstanding for Canada and showed he can be a driver of the play, taking over with his two-way awareness, offensive creativity, and skilled hands. He has elite vision and can distribute the biscuit like few others available in this draft class. He skates well and has the intelligence to get himself into proper position to open up lanes. A strong middle first round option for me but has potential to rise as the season progresses.

The highlight of the event for many was the breakout performance of this skilled winger who basically took over a couple games on his own. While Team Russia did have quite a few high end talents, Podkolzin stood above the rest as elite as he utilized his skills of finesse puck control blended with power, speed and incredible attacking instincts. His shot was one of the most dangerous at the event and he also showed a willingness to drive back deep into his own zone to retrieve pucks. His leadership, determination and high-end skills have him sitting in most teams top ten prospects for 2019 after this event.

This playmaking winger dazzled with his ability to distribute the puck with skilled passes and set-up numerous scoring opportunities for Russia at this event. The Gatineau import pick is slippery with the puck, his hands are quick and creative as he can weave his way through traffic, and is able to get to scoring areas where he can fire off a quick wrist shot in stride or make a soft dish to a teammate who may be in better position. A riser for sure on many team draft lists.

Coming into the event I was looking forward to seeing Gutik, but after watching all but one of Russia’s games I came away disappointed with his inconsistent complete level. He sure has some upside as a skilled winger that possesses size, soft hands and the ability to create a scoring chance out of thin air combo that will get evaluators excited, but for a six-foot-three winger he becomes invisible for long stretches as well. On top of the scoring chances he manufactured he also stood out for a lack of discipline and half efforts that will tend to stick in the minds of scouts.

Much of the talk at the Hlinka Gretzky Cup centered upon this skilled puck moving blue liner, as some scouts were enthralled with his progression from last season while others cautioned saying this could be just an aberration. I was in the impressed field and feel he could be close to Victor Hedman upside if he continues to progress his offensive game. I likes his defensive ability, gap control and physicality as well as the obvious offensive chances his legs generated. He moved from an early second round ranking to number ten in my preliminary rankings after this event but I know of some who have moved him into a ranked as a top three now.

Just a real safe, smart and effective two-way rearguard who does not wow you with dynamic end to end rushes or slick puck handling but just makes the smart play that pushes the play up ice. He skates well, closes off opponents taking away angles like a seasoned vet, and always has his stick on the puck. He makes a strong outlet pass and will join the attack when he deems it safe to do so but is not looking like a high point producing blue liner. He maintains a late first round grade for me after his performance at the Hlinka Gretzky Cup.

The talented Slovak who was a beast at the spring U18 Championships, as an underage participant, had some high expectations coming into this event. Unfortunately, in my opinion, he was just okay and didn’t show the same intensity and ability to create chances as he did last April. He has the talent -speed, instincts, hands and a solid shot – I just have questions regarding his compete level. He will need to show better intensity for the Sea Dogs this season to improve his draft stock.

One guy who stood out to me on the Czech roster was this big and athletic defender who skates well, jumps into the play at the right times, and can handle the puck decently well. His main weapon was his blast from the point that he gets on net effectively. Defensively he was reliable and played well in his own zone, positioning attackers to the outside and keeping solid gaps. Winning 50/50 battles and making a strong pass out of his zone. Not a lot of puck moving upside but looks like a strong defender who may contribute a little offensive support.

I had not seen the American center play before this event but was impressed with his game. The playmaker for the U.S. team with a wide skating stride made skilled passes and set-up teammates with perfect timed passes game after game. His skill set is not going to blow you away as he is just average to slightly above in many areas however he sees the ice very well and distributes the puck through the tightest of lanes with perfect touch. It was only a few games worth of views but this tournament put him on my radar.

An intelligent sniper who connected on many of his scoring chances. He impressed with his speed, elusiveness in getting to his spots and getting off a wicked shot – whether that be a quick wrist shot or deadly one-time snap shot. Size is not going to be his strength nor is his play along the walls but his goal scoring prowess is a darn good asset to add to a team’s power play. He moved up my ranking after this tournament.

The American captain exuded character and leadership for a U.S. squad that looked good in flashes but inconsistent overall. His board play, willingness to go to the net shift after shift, overall high effort level, intensity and maturity cannot be questioned. However, I failed to see much in the way of high end offensive skill or the creativity to generate his own scoring chances that left me with questions regarding his upside. I liked the character he brought to this team however and hope that my future views will yield a different projection.

This highly skilled forward was on my hit list as a must see at this event as I have been impressed with his play in Finland’s junior league, however, I came away less than enamored with him in Alberta and really many of the higher end prospects on the Finnish squad. He was invisible for much of the event sans the last game against Switzerland where he put up all of his six points. He did not show his impressive shot and willingness to get to the prime areas like I was expecting. He drops slightly in my ranking based on his performance at this event.

A top end skater who showed maturity, solid defensive coverage and strong puck distribution skills as the two-way defenseman gained additional ice time as the event unfolded. He played the point on the power play and moved the puck like a pro. He really opened eyes with his poise, instincts and willingness to jump into the attack. One of the top defenders available for the 2020 draft.

“The next big thing” is what many have anointed Lafreniere and after watching shift after shift of the Canadian captain making an impact I have to agree. He upped his game from what I saw last season in Rimouski and looks like a future NHL star. He is a high IQ player who controls the flow of the game. His hands are amazing, he controls the puck well and can both distribute the puck and fire a shot home. My early top ranked 2020 draft prospect.

A sniper who has an absolute rifle of a shot. He missed a lot of shots by mere centimeters over the course of the tournament or Sweden’s outcome might have been different. He is quick, elusive, has soft hands and he knows how to create space to get his shot off but if he is not scoring goals he is not contributing much. Still a top prospect for the 2020 draft but you hope he rounds out his game a little.

A smaller but incredibly bright goal scoring winger who showed flashes of dominance. He was fun to watch as his quickness, creative hands and ability to see the entire ice were on display all event as he made those who were on his line better. He generated the majority of scoring opportunities for his squad and showed some good intensity. In my opinion the second most impressive future draft eligible prospect participating in Alberta.

A tiny but offensively dangerous winger with elusiveness and darting quickness who sees the ice well and makes slick passes to generate scoring opportunities. Despite his lack of size he went to the dirty areas and showed off a quick shot whenever he had the chance. If this offensive dynamo can add some muscle to his frame he would be a highly coveted prospect when he becomes draft eligible.

This quick and athletic puck stopper with the size to fill the net naturally really impressed with his ability to close the door at this event. He closes off the bottom of the net with a wide butterfly and seals off the ice with his quick pads. He should be a solid option for any team looking to add a top goaltender prospect in the 2020 draft.

The top Swiss player for me at this event, one in which the Swiss were badly out played, he is quick on his feet, can handle the puck making plenty of skilled dekes to gain the zone, displays solid vision and puck distribution skills but desperately needs to eat a few cheeseburgers as he gets tossed off the puck with very little physical effort.