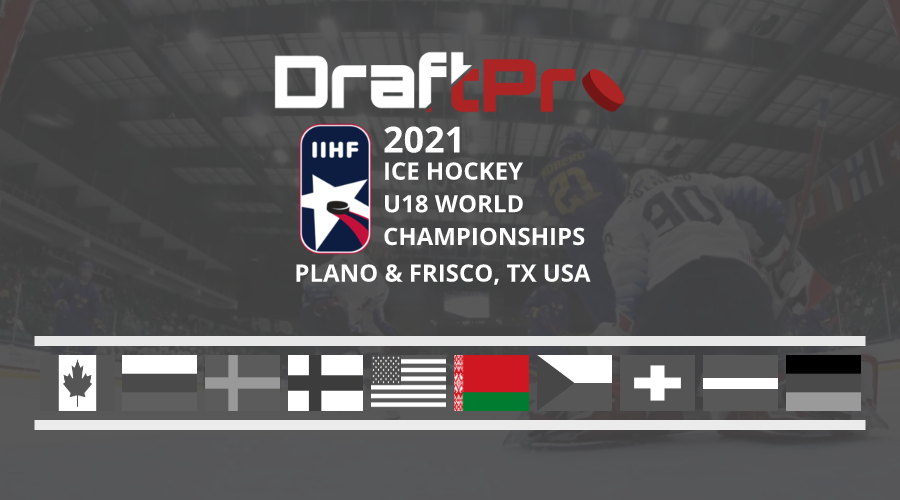 Belarus was the surprise team of the tournament, thanks to a dominant breakout performance by winger Danila Klimovich, and some quick puck movement on the back end from defender Dmitri Kuzmin. Those two were not the only ones who stood out however.

Belarus only lost to Canada and Russia by three goals apiece and showed that they can hang with the hockey nations of the world at this level. As a team, their strong puck movement in the offensive zone, and specifically on the power play was the most impressive part of their tournament. They had excellent chemistry and were able to connect on multiple high-level plays, often taking advantage of PP opportunities, and finishing with the 4th best power play in the tournament. The Belarussian team were overwhelmed at times by the Canadians, Russian, and Swede’s speed and skill.

Here are some player reports from our crew on the Belarus U18 players that stood out.

Zhigalov, a rare right catching goaltender, and a breakout star for Belarus. He was bombarded with grade A chance after grade A chance, but he stood tall, stopping some shots that seemed unsavable in his limited action. The first thing you notice about Zhigalov is he’s big, and he fills the net well. He seals his posts incredibly well and makes it tough for shooters to find daylight when facing him straight on. He’s also very agile, able to get across the crease quickly to make saves and can track the puck well through screens and deflections. His reflexes allow him to make second and even third opportunity stops, something a goaltender needs to be able to do. He looks to be a fine skater technically, and I didn’t see any glaring issues when it came to his rebound control. Very small sample size so his draft status remains unclear. If he is still there in the seventh round however it might be a prudent low-risk selection.

Kuzmin is a smaller offensive defenseman with high-end puck skills and creativity. Isn’t the fastest skater but has strong edges and cuts to change directions on a dime away from checkers. Agile and Quick. Excellent lateral mobility. Uses his skating to open the ice up and create opportunities for his teammates. Great vision and creativity under pressure with a low-panic threshold. Strong puck distribution skills with a soft touch to make skilled passes in a variety of ways. Individual skills to dance 1-on-1. He’ll need to limit the turnovers as he has a ton of skill but can get caught trying to do too much, turning pucks over at the offensive blueline and unfortunately not showing the straight-line speed to get back. Have to love though that he is always looking to make a play. Strength is an area that he will need to continue building on as he will shy away from physical play. Uses his feet to defend and stay mobile. Defends with a good gap, could be tighter, but his solid stick positioning fends off puck carriers. The creativity and the flash he showed as a puck carrier raises his offensive upside but needs to reel in his offensive mind at times to make smarter plays, and choose the right time. He has potential to become a top four defenseman that sees PP time and gives you extra offense down the depth chart on the blueline.

Mikhalyov is an offensively skilled left shot winger that is still fairly undersized. He uses a long stick to make up for it. Has a bit of Mats Zuccarello to his game as a smaller play with a long stick. He was playing on the second line left wing and was strong in that role. Offensively he has some jam and will play in the dirty areas of the ice. He will engage in puck battle but sadly just gets outmuscled most times. Defensively it is much of the same where his positioning is strong but then gets pushed around. He did make some smart plays in Texas but also seemed to be hesitant to bring his full potential. His size will be a big issue for him but we love his IQ and puck handling ability. He may be worth a late round pick and hope that over the years he matures and grows physically. He has the skillset that would translate well as far as IQ and vision.

Klimovich is a creative right shot forward with offensive talent. He plays on the top line for the Belarus team and is really their top offensive option. He has a very creative mindset for the game and demands the puck at all times. I love how much he wants to make an impact but he has very poor body language towards his teammates when they miss passes or plays. With the puck hes a wizard with some fantastic one on one skill and stick handling ability. He can embarrass you in one on one scenarios as he is shifty and will try creative dekes to get open ice. I love his hands in tight as he showed all game he could still create under pressure. Watching Klimovich in Texas all you could hear was the LMFAO ft. Lil Jon tune “Shots” in your head as the “Belarusian rocket” was dangerously firing shots, shots, shots, shots, shots, shots on net for Belarus. Looking like an Overchkin-lite from the circle jamming one-timers or taking a millisecond to release a snapshot from the slot area. And it worked for him as he was lighting up the event, but teams soon found the way to stop Belarus was to limit Klimovich’s time and space. A mammoth of a shot, his wrister, slapper, and snapper are all high caliber and he isn’t afraid to shoot from anywhere, literally. He is a strong skater with a long lanky stride and some power behind it. He is a fairly straight up skater and carries his height. Defensively he has room to grow effort wise as he doesn’t jump until he has a chance to get it. Love his offensive game and battle level but needs to bring it shift to shift. He has a high IQ and when the effort matches up like some of the tournaments earlier games he pulls off some pretty plays to help the team. He might not be far away as he has a solid build for the NHL and just needs to improve his game a bit more away from the puck. He has a high ceiling and potential to be a top six winger if everything pans out in his development. He isn’t likely to be a safe pick that can play down the line up so if he makes it, he is producing. An exciting offensive talent that put his name on many draft boards at this event.

The three best players of the tournament for Belarus were goaltender Tikhon Chaika, Kuzmin, and Klimovich. Klimovich led the team in scoring with six goals in five games. Kuzmin and 2022 eligible forward Yegor Sidorov each potted five points to tie for second in scoring.