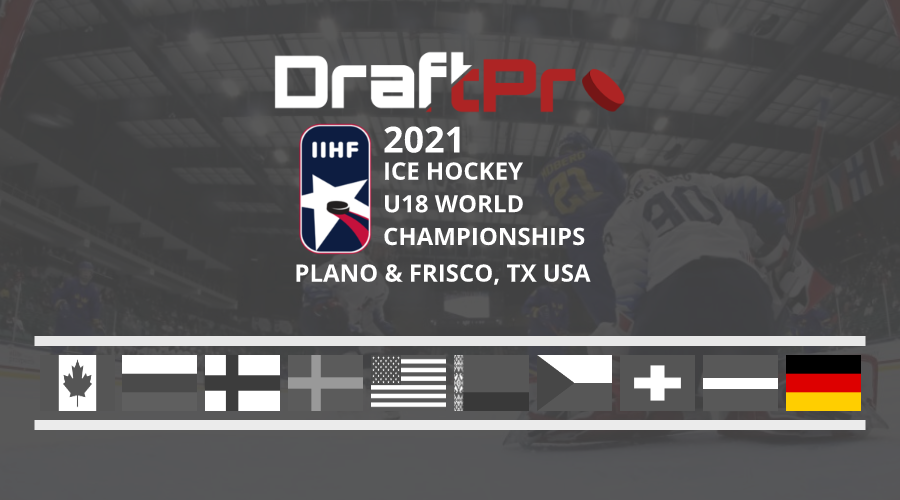 Unfortunately, the German U18 entry had a rough go of it in Texas going 0-4 in their games and not making the quarterfinals. Being outscored 5-24 in those contests which included a 10-0 drumming at the hands of Finland. The team really struggled with the departure of some of their top talent, lacking that fire power to really be dangerous offensively, struggling to get into the offensive zone in some of these games.

Germany playing a heavy, physical game but were just outmatched in talent level. Unable to bring sustained offensive pressure they resorted to a defensive posture. They simply could not keep up.

Here are some player reports from our crew on the German U18 players that stood out.

Nikita Quapp is a big left catching goalie with some athletic ability. He played decently despite being quite frankly out matched and he was the star in keeping them in many games. He has a solid poise to his game for a big goalie and is solid in positions. He does not come out too attack the shooters with a ton of pressure but relies on his size to cut down angles. He is mainly on the goal line and although he reads things well, I would like to see him cut down angles more instead of sitting back. He did seem to get caught under the glove a few times where it almost looked like he was stuck between standing up and the butterfly. He does have a nice butterfly, but he relies on it too much. He will drop right away on most shots. He does cover most of the net from the position and it doesn’t seem to hold him back right now. Side to side he is athletic and makes quick moves. What I love most about his game is the work ethic as he never gives up on a play. He will battle cross crease to make some crazy saves under pressure. He doesn’t have the high IQ some of the other top goalies have but provides the size and athletic ability to be a project prospect.

Wolf had a strong game against the U.S. in his only contest he played at the U18’s. Staying focused as he faced a ton of rubber and had to withstand ample amount of pressure at once on numerous occasions. Good size. Great athleticism to go with his size and ability to be fast and big while moving around in his crease. Fast reflexes. Moves well with the play due to his great quickness. Plays a little scrambled at times and can lose his footing as he pushes into shots. Smooth skater. Fluid moving backwards in his butterfly and getting out on top of his crease where he challenges shooters extremely well. Really liked his aggressiveness on shots. Long legs help him seal holes downlow and puck is behind him. Strong anchor leg in his RVH to push off with strength. Pushes side-to-side efficiently well. Holds his glove high which can be an issue going forward as skilled shooters could exploit that and get by him right above his pad on the glove side. That to go with a shaky glove hand that saw problems catching and hanging on to shots. Visions of the puck was hit or miss as at times he was tracking really well and others you could see him dropping down while having no clue where the puck was. Actively comes out to stop and set up pucks for his defenseman. Wolf’s athleticism paired with his size will make him a solid pro goaltender as well as having strong positioning in his crease. Definitely a goaltending prospect to keep an eye on for the 2022 Draft.

Rossmy is a big winger that plays a heavy game. Top line left wing played well despite only creating a few chances. More of a complimentary player. He can play either wing and doesn’t mind his off wing due to his release. He has a hard shot and can shoot it off both feet. The problem is his accuracy. He blew some good chances wide in this tourney. Played pretty physical in some contests throwing his weight around on the forecheck and in open ice. He is a big body and when he does make contact it hurts. He is not the best skater as his stride is rather choppy. He does have slower foot work as well so getting going takes him more than a few strides. He was skating into traffic too often or dumping the puck away. With the puck he does make some high-end plays to help offensively and brings a decent amount of creativity to his game. He has nice vision and passing sense. He plays on the top power play off the wall and in the slot. Needs to create more chances for himself. He is a few years away at least as he will need to work on developing his two-way game, his skating and shot accuracy.

Zap is a skilled yet undersized center. He could not seem to use his speed to his advantage and was getting pushed around on top of that. He did do a good job offensively creating offense for others when the opportunity was there. Possesses quick hands and can make passes in traffic out of nowhere. Love his puck skill as it seems he has it on a string at times. What is concerning is when he holds onto it too long, he is simply over powered so often in battles. He plays fearless and will charge into any battle headfirst at top speed. He plays with energy and pace each shift and has a high motor. Defensively he struggled in one on one match ups especially in half ice scenario. He was used on the top power play unit where they clearly wanted the puck on his stick. He has the high IQ to read the play and dish from the half wall and more space benefits his game. He will need to work on his release to become a scoring threat. He moved well and has quick feet that he uses to build his speed. He can transition the puck with a few cross overs and dynamic strides. His foot speed is high end and he uses strong edge work to carve up defenders. He is agile side to side and dangle with the puck. Could be a late round pick due to his offensive touch but will need some time to mature and gain strength so he is more of a project player.

A skilled offensive option for the Germans, Lutz was alone in trying to generate offense and could benefit and shine more playing beside players equal to his skill level. The 2022 eligible has skilled, smooth handles. Great hand speed as he broke the puck out regularly. Solid puck protection holding it in his hip pocket while shoulder checking where his teammates are or will go to. Plays a fast style of game with finesse. Strong reads recognizing the pressure and passing it tightly to a teammate. Showed good offensive vision. Balanced skater with an efficient stride to chase down pucks or lead the play up ice. Smooth pivots and edgework. Has high upside going into his draft year next fall.

Mayr may not have the size to make the jump to pro hockey, but he is such a fun player to watch. He is incredibly agile and has the ability to take the puck end to end as a defenseman. His edgework is near elite and being so small and light allows him to glide across the ice like it is nothing. He also defends much, much better than expected. He uses his skating ability to keep tight gaps and close them quickly, and his skill with the puck in the defensive zone allows him to slow the game down and regroup. Not really an NHL prospect, but a very fun player to watch nonetheless.

Heigl plays with lots of pace and has a fair amount of skill to his game. Despite being outmatched by his opponents in Texas, He did an excellent job creating chances for his line. He was the quarterback of Germany’s first power play unit from the left circle, moving the puck quickly and accurately. In a tournament where Germany did not have much room to do anything, he was one of the few bright spots.

Rossmy, Zap and Heigl we co-leading scorers with two point each. Quapp, Rossmy, and Heigl were voted Germany’s top three players of the tournament.