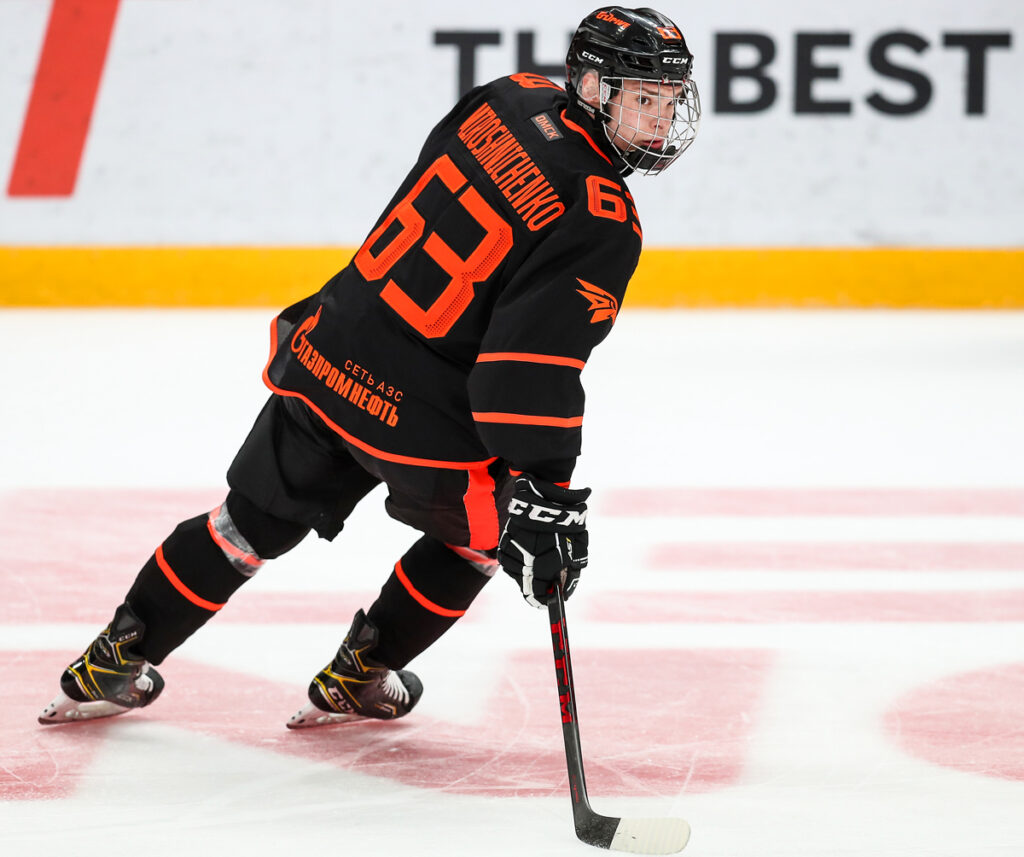 Welcome to Draft Prospects Hockey’s introduction to the 2022 NHL Draft Class series. This is a six part series which we will be releasing over the next couple weeks to give you the readers some insight on whom we feel is the cream of the crop for 2022.

Miroshnichenko (6 foot 1, 185 pounds), scored 15 points (five goals, 10 assists) in 20 games for Omskie Yastreby in the MHL last season. He participated in last year’s 2020-21 IIHF U-18 World Junior Championship for Russia where he tallied eight points (six goals, two assists) over seven games, along with bringing home a silver medal. His six goals were the most among all 2022 NHL Draft eligible players in the tournament. Miroshnichenko also won a gold medal for Russia at the 2021-22 Hlinka Gretzky Cup where he put up nine points (four goals, five assists) in five games, which was good enough to tie him for fourth in scoring in the tournament.

Miroshnichenko has caught the eyes of many scouts including DraftPro Head Scout Jared Brown who had this to say about the Russian prospect, “He is a bulldozer on the ice, already physically mature and hard to knock off stride. He has pure strength to outmuscle and win the majority of his pucks battles. The talent, elite skill set, and strength make him a lethal offensive weapon on every shift.” Another DraftPro Scout Joseph Peters spoke very highly about Miroshnichenko saying, “He is an elite potential level player, who could be an absolute freak in the pro game. His relentless pursuit of the puck shift after shift is like a bull in a rodeo making him nearly unstoppable when he is on top of his game.”

A player that could give Ivan Miroschnichenko a run at being the top Eastern European prospect for this 2022 NHL Draft is another Russian forward, right-winger Danila Yurov.

Yurov (6-1, 172), “is a gifted offensive talent with fantastic puck skills,” says Brown. During last season as a 16-year-old, Yurov split time playing for Stalnye Lisy Magnitogorsk in the MHL and for Metallurg Magnitogorsk in the KHL. He posted 25 points (13 goals, 12 assists) in 23 games during his time in the MHL, and also scored two points (one goal, one assist) over 21 games in the KHL. Like Miroshnichenko, Yurov also captured a silver medal for Russia at the 2020-21 IIHF U-18 World Junior Championship. He put up some impressive numbers during the tournament, chipping in with 11 points (four goals, seven assists) in seven games. Those numbers helped him take top honours for most points by all 2022 NHL Draft eligible players in the tournament.

Brown went on to say this about the talented Russian prospect, “One-on-one with a defender he is quick, deceptive and creative. Yurov can really wow you out of your seats. His skating is extremely polished and creates scoring chances off the rush. He’s a dual threat as both a distributor and a goal scorer.”

Ivan Miroshnichenko and Danila Yurov are just a few of the several Russian prospect names you will hear over the 2022 season in the lead up to the NHL Draft. Some more names of the Red Machine you may become familiar with include forwards, Gleb Trikozov, v, and Alexander Perevalov, defensemen, Arseni Koromyslov, and Vladimir Grudinin, and goaltender Sergei Ivanov, who all play for their respective clubs in the MHL.

Trikozov (6-1, 185), is a fellow teammate of Ivan Miroshnichenko in the MHL for Omskie Yastreby. The talented winger posted 30 points (15 goals, 15 assists) in 49 games as a 16-year-old last season. He followed that up by winning the gold medal with Russia at the 2021-22 Hlinka Gretzky Cup, averaging a point per game, scoring five points (one goal, four assists) in five games. He projects as a late first round pick for the upcoming 2022 NHL Draft as he currently sits ranked as the 28th overall prospect on the DraftPro 2022 preliminary rankings list.

Gazizov (5-10, 187), is a forward to watch out for that could fly up the draft rankings as the 2022 season progresses. He, like Miroshnichenko and Trikozov, plays for Omskie Yastreby in the MHL. Over 13 games last season he contributed with four points (three goals, one assist) where he got his first taste of MHL action. At the 2021-22 Hlinka Gretzky Cup he really impressed. Not only did he walk away with a gold medal, but he averaged two points per game, scoring 10 points (three goals, seven assists) in five games. That was good enough to place him third in scoring in the tournament, along with first in scoring for all 2022 NHL Draft eligible players in the tournament.

Perevalov (6-0, 185), “is a speedy playmaking winger,” says DraftPro Scout Jonah Fleisher. He plays for Loko Yaroslavl in the MHL. Last season as a 16-year-old he put up six points (four goals, two assists) in 17 games. In the 2021-22 Hlinka Gretzky Cup he impressed many with his play, where he averaged a point per game, contributing with five points (three goals, two assists) in five games, en-route to winning a gold medal with Russia.

Fleisher continued to say more good things about Perevalov, “He has unbelievable speed, quick feet, effective yet not flashy stick handling, and a tireless motor in the offensive zone, giving him great breakaway potential and the ability to effortlessly create and find space on offense.”

Koromyslov (6-2, 165), is a left-handed defenseman that plays for SKA-1946 St. Petersburg in the MHL. During last season with SKA-1946, he scored 14 points (three goals, 11 assists) over 43 games. He attended the 2020-21 IIHF U-18 World Junior Championship for Russia where he tallied three points (one goal, two assists) over seven games and also added a silver medal to his resume. Koromyslov is currently the 11th ranked prospect for defensemen and the 36th ranked prospect overall on the DraftPro 2022 preliminary rankings list.

Grudinin (5-9, 150), is a left-handed defenseman that plays for Krasnaya Armiya Moskva in the MHL. He is currently the 54th ranked prospect overall on the DraftPro 2022 preliminary rankings list. Last season he contributed with five points (five assists) in 46 games. He also attended the 2020-21 IIHF U-18 World Junior Championship where he helped Russia win the silver medal by putting up five points (one goal, four assists) in seven games, which tied him with Team USA’s Lane Hutson for most points in the tournament for 2022 NHL Draft eligible defensemen.

Ivanov (5-11, 157), is the highest ranked goalie on the DraftPro 2022 preliminary rankings list and for good reason. Ivanov plays for SKA-Varyagi im. Morozova in the MHL, where last season he posted a .921 save percentage over 25 games as a 16-year-old. He followed that up at the 2020-21 IIHF U-18 World Junior Championships with four wins and a .913 save percentage over six games, winning the silver medal for Russia. At the 2021-22 Hlinka Gretzky Cup he went undefeated over three games, while posting a .911 save percentage and taking home the gold medal for Russia.

DraftPro Scout Matt Morrison had this to say about Ivanov, “He is an undersized goalie who plays the game with speed and agility. What he lacks in size he makes up for with his high IQ and athletic ability. He has a wicked quick glove hand that he loves to tempt shooters with. He will give you space and take it away before you know it.” Morrison went on to say, “I love his competitive edge and drive to be the best. He wants to be the starting goalie wherever he is and often plays to that ability.”

So far you have been introduced to eight 2022 NHL Draft eligible Russian prospects that will hope to hear their names called in the upcoming draft. Rounding out the ten Eastern European prospects to watch for is Belarusian forward, Yegor Sidorov, and Latvian forward, Sandis Vilmanis, two players that could both be surprise prospects this upcoming season.

Sidorov (5-10, 154), is a talented playmaking forward. He was a point per game player in the Belarus Vysshaya League. He posted 51 points (26 goals, 25 assists) in 50 games over the last two seasons playing for Minskie Zubry in 2019-20 and The Belarus U-17 Team in 2020-21. Sidorov also got some playing time last season with the Belarus U-18 Team in the Belarus2 League, where he scored 14 points (seven goals, seven assists) in 24 games. He played as an underage forward at the 2020-21 IIHF U-18 World Junior Championship, where he led the Belarus team with five assists in five games and finished second on the team in scoring. This past June he was selected 20th overall in the first round of the 2021 CHL Import Draft by the Saskatoon Blades of the WHL where he plans on playing this season.

Vilmanis (6-0, 185), “is a smooth, fluid skater with raw offensive abilities,” said DraftPro Head Scout Jared Brown. Over 22 games with HK Riga in the MHL he put up four points (two goals, two assists) last season. He wore his nation’s colours at the 2020-21 IIHF U-18 World Junior Championship where he played well, scoring two points (one goal, one assist) in three games for a Latvia team that lost every single game and were outscored 21-6 in the tournament.

Brown followed up by saying this about Vilmanis, “He attacks with speed, causing turnovers in the neutral zone and turning them into a rush scoring chance. Vilmanis has a strong offensive mind to facilitate clean passes from the perimeter that generates shot attempts. He is also an efficient passer and makes smart decisions with the puck in the offensive zone.” Look for Vilmanis to continue to gather the attention of scouts this season as he looks to rise up the draft ranking boards.

For more on the Eastern European prospects and the 2022 draft class be sure to pick up a copy of our 2022 Draft Preview Magazine available this fall.