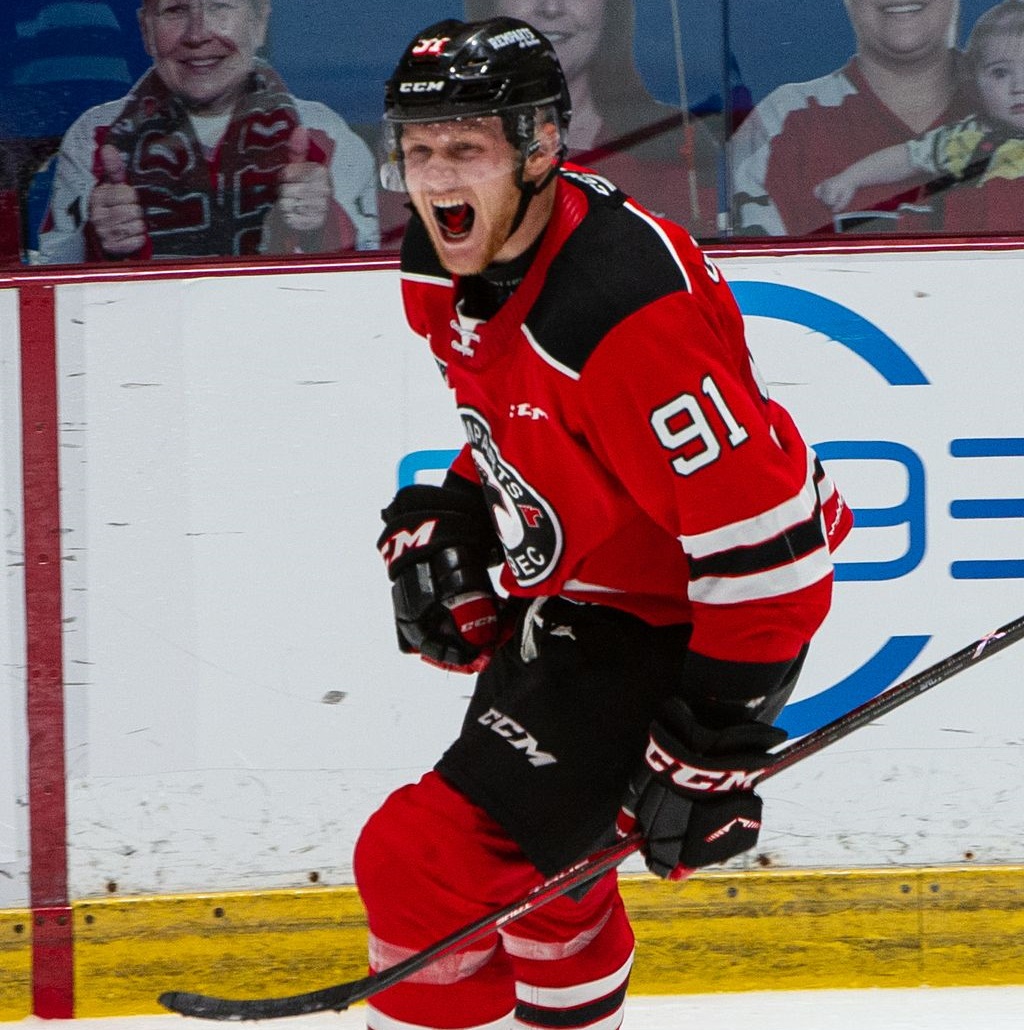 Gaucher (6 foot 3, 207 pounds), is a big right-handed center who was drafted eighth overall in the first round of the 2019 QMJHL Draft. As a rookie in the 2019-20 season with Quebec, he scored 24 points (13 goals, 11 assists) in 59 games. He followed that up last season averaging more than a point per game for the Remparts, putting up 31 points (14 goals, 17 assists) in 30 games. He suited up for the Canada Red U17 Team at the 2019-20 World Under-17 Hockey Challenge where he contributed with a team high of five points (two goals, three assists) over five games, before eventually losing in the quarterfinals. Gaucher is currently the 25th ranked prospect overall on the DraftPro 2022 preliminary rankings list.

Speaking with DraftPro scout Antoine Tremblay, he had some good things to say about Nathan’s game. “He’s a big two-way center who plays with poise and calmness. Gaucher is powerful around the net and he can be dangerous in this area. He is smart with the puck and is able to gain time in the offensive zone by displaying great puck protection and patience.”

Like Nathan Gaucher, there are plenty of QMJHL prospects to be excited about this season in the lead up to the 2022 NHL Draft. This includes teammates, left-winger Antonin Verreault, along with defensemen Tristan Luneau and Noah Warren, who all play for the Gatineau Olympiques.

Verreault (5-8, 163), was selected second overall in the first round of 2020 QMJHL Draft by the Gatineau Olympiques where he played last season. He had an outstanding rookie season where he tallied 29 points (six goals, 23 assists) in 31 games, which helped him win the Michel-Bergeron Trophy as the QMJHL Offensive Rookie of the Year, along with being named to the QMJHL Rookie All-Star Team. Verreault also participated in the 2020 Youth Olympics for Team Canada where he averaged over a point per game and led the team in scoring with five points (three goals, two assists) in four games, along with winning a bronze medal.

“Verreault is a dynamic winger with great offensive instincts. He can be really dangerous when paired with good linemates. He has great vision that helps him see plays develop a couple steps ahead of his opponents,” says Tremblay.

Luneau (6-2, 174), went one spot ahead of Verreault in the 2020 QMJHL Draft as the Gatineau Olympiques took him first overall. Like Verreault, Luneau didn’t disappoint in his rookie season last year for Gatineau. He put up some impressive numbers for a defenseman registering 18 points (four goals, 14 assists) over 31 games, which was good enough to win the Raymond Legace Trophy as the QMJHL Defensive Rookie of the Year and was also named to the QMJHL Rookie All-Star Team. Luneau also joined Verreault at the 2020 Youth Olympics playing for Team Canada where he recorded two points (two assists) in four games while taking home a bronze medal. Unfortunately, Luneau had to have surgery for an injury and will be out several months to start the upcoming season. He is still a prospect to keep an eye on in the latter part of the season after he recovers from surgery.

When asked about Luneau, Tremblay had this to say, “Luneau is a big reliable puck moving defenseman. He plays with so much poise and maturity. He has great skating abilities that allow him to maneuver his way with the puck both from his own zone and through enemy lines. Luneau has great decision making with the puck, especially in the neutral zone. His precise breakout passes allow him to find teammates quickly.”

Warren (6-5, 214), is a player that could have a bigger role this season with Luneau’s injury. Warren was drafted eighth overall in the first round of the 2020 QMJHL Draft by the Gatineau Olympiques where he played last season, scoring four points (one goal, three assists) in 29 games. He joined fellow teammates Verreault and Luneau, winning a bronze medal at the 2020 Youth Olympics for Team Canada. Standing at 6’5”, he is a mobile skater who is able to use his size to play a physical defensive game and also has a big shot. There is no shortage of athletics in the family as his father Claude used to be a swimming coach at Laval University and his mother Magalie was a nationally ranked swimmer. Also, his grandfather Raynald Boutin was a defenseman for the Chicoutimi Sagueneens back in the 1960s. Warren will hope the athletic genes can help him hear his name called at the 2022 NHL Draft.

A couple more teammates to keep an eye on during this QMJHL season are defenseman Maveric Lamoureux and center Justin Cote who play for the Drummondville Voltigeurs.

Lamoureux (6-7, 196), like Noah Warren, is a big right-handed defenseman who is a smooth skater and uses his size well to defend. He was selected 12th overall in the first round of the 2020 QMJHL Draft by Drummondville. Last season during his rookie year he racked up seven points (one goal, six assists) in 24 games. Lamoureux, like Warren, also has some hockey roots in his family. His father Patrick played three seasons in the QMJHL for the Granby Bisons back in the early 1990s. Patrick also played three seasons with Concordia University in the Canadian Interuniversity Athletic Union (CIAU) and finished up his career in the Quebec Semi-Pro Hockey League (QSPHL) over five seasons before retiring. Lamoureaux is a solid defender and a prospect that could rise up the draft ranking boards this season.

Cote (5-6, 163), is a player that stands a foot shorter than fellow Drummondville teammate Maveric Lamoureux, but don’t let his size fool you, this kid can score goals in bunches. Drafted with the first pick in the second round of 2020 QMJHL Draft by Drummondville, Cote impressed in his rookie season last year. He put up 25 points (17 goals, eight assists) in 34 games, which was good enough to lead all QMJHL rookies in goals scored and also helped him be named to the QMJHL All-Star Rookie Team. He wore his nation’s colours for Team Canada at the 2020 Youth Olympics where he won a bronze medal, scoring one goal over four games. If Cote can build off his successful rookie year this season, he has a good chance to rise up the draft ranking boards and hear his name called at the 2022 NHL Draft.

Sticking with the teammates trend, here is another duo to keep an eye on this season. Moncton Wildcats center Yoan Loshing and goaltender Vincent Filion.

Loshing (5-9, 162), is a left-handed center who isn’t afraid to put the puck in the net. In 2019-20 Loshing took the risk to move from his home province of Quebec, to Ontario, to play in the U16 Greater Toronto Hockey League (GTHL) against some higher competition. It was a risk that ultimately paid off as he had an impressive season for the Mississauga Senators U16 AAA Team, scoring 36 points (24 goals, 12 assists) in 28 games. His 24 goals were good enough to tie him for the most goals in the league. Taking that risk to move provinces eventually helped him get drafted 13th overall in the first round of the 2020 QMJHL Draft by the Moncton Wildcats, who he played for last season contributing eight points (four goals, four assists) in 19 games.

Filion (6-0, 178), was drafted sixth overall in the first round of the 2020 QMJHL Draft by the Val-d’Or Foreurs, making him the highest drafted goalie since the Drummondville Voltigeurs drafted Olivier Rodrigue third overall in 2016. Filion didn’t end up playing a single game for Val-d’Or before being traded last season to the Moncton Wildcats in a deal for Jordan Spence, who won the QMJHL Defensive Rookie of the Year award in 2018-19. In the 2019-20 season Filion played for Trois-Rivieres Estacades in the Quebec Midget AAA League (QMAAA) where he had a solid season, posting a .928 save percentage, 2.08 GAA, along with 14 wins in 20 games. He also played for Team Canada at the 2020 Youth Olympics where he had a 2.47 GAA and started every game, winning two of the four games en-route to taking home a bronze medal. Watch for Filion to improve on his draft stock by getting a full season under his belt in Moncton this year.

Rounding out the ten QMJHL prospects to watch for this season are two intriguing players who could catch the eyes of scouts and rise up the draft ranking boards. Halifax Mooseheads center Markus Vidicek and Victoriaville Tigres defenseman Pier-Olivier Roy.

Vidicek (5-10, 152), is a solid two-way player with plenty of offense in his game. He was drafted 14th overall in the first round of the 2020 QMJHL Draft by the Halifax Mooseheads. Last season for the Mooseheads in his rookie year he put up some impressive numbers, scoring 31 points (10 goals, 21 assists) in 43 games. The 31 points were good enough to tie him for second in points among all QMJHL rookies. He weighed 146 pounds last season and appears to have put on an extra 15 pounds coming into training camp, which should only help his game develop more this season, as he needed to bulk up a bit. Vidicek is currently the 52nd ranked prospect overall on the 2022 DraftPro preliminary rankings list.

Roy (5-9, 170), is a left-handed defenseman that can play in all situations. In 2019-20 he played for the Levis Chevaliers in the QMAAA where he had 32 points (two goals, 30 assists) in 42 games. The 32 points gave him top honours for most points for defensemen in the entire league. He was selected seventh overall in the first round of the 2020 QMJHL Draft by the Victoriaville Tigres. Last season for the Tigres he scored 10 points (one goal, nine assists) in 22 regular season games, along with five points (five assists) in 19 playoff games en-route to hoisting the President’s Cup and becoming a QMJHL champion. He was also a nominee for the 2020-21 QMJHL Defensive Rookie of the Year, but eventually lost to the winner of the award, Tristan Luneau.

Tremblay spoke highly of Pier-Olivier Roy when asked about him, “I was really impressed by his play early on in his rookie season. He played with a lot of confidence and was used in all situations of the game. He has great vision in his own end with his breakout plays being really effective. Roy has decent skating abilities and he isn’t overly flashy. He uses his smarts to make plays from his zone and likes to support the attack in the offensive zone.” Watch for Roy to build off last season as he is certainly a player that could be a riser in the draft rankings over the course of the QMJHL season.

For more on the QMJHL prospects and the 2022 draft class be sure to pick up a copy of our 2022 Draft Preview Magazine available this fall.