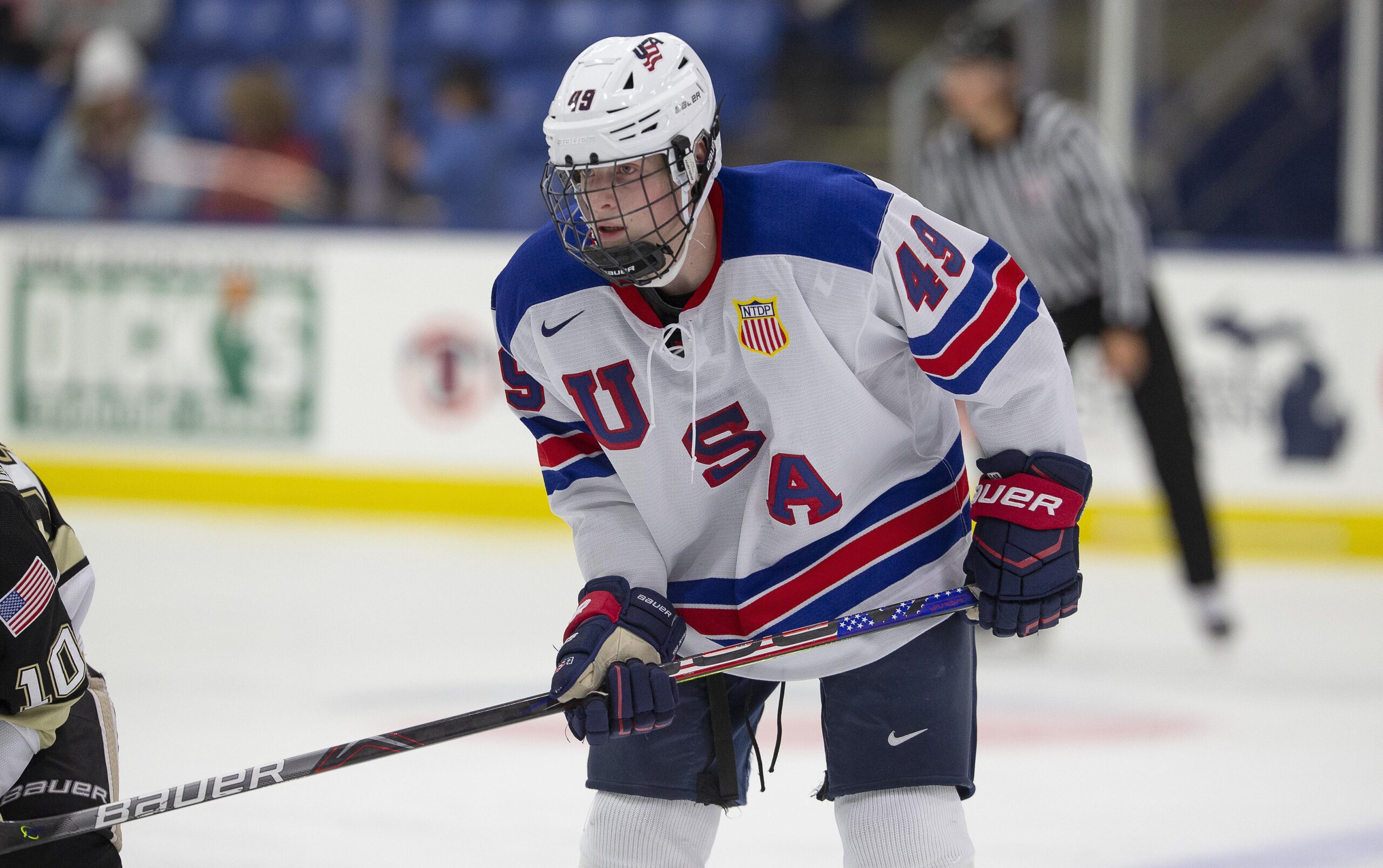 McGroarty (6 foot 1, 198 pounds), doesn’t have any issues putting the puck in the back of the net. As a 15-year-old in 2019-20 he played for the Oakland Jr. Grizzlies Team in the U15 AAA League where he absolutely destroyed the competition, scoring 160 points (82 goals, 78 assists) in 63 games. Last year, he split time playing for the U.S. National U17 and U18 teams in the USDP where he averaged a point per game with the U17 Team, putting up 35 points (17 goals, 18 assists) over 34 games, along with contributing six points (three goals, three assists) over 19 games with the U18 Team.

Speaking with DraftPro Scout Kai Farenholtz, he had nothing but good things to say about McGroarty, “Rutger in my eyes is kind of like an Auston Matthews lite. He’s got the same frame, deceptive stickhandling, decent vision, and a nasty wrist shot. You CANNOT give him space, you will pay the price dearly if you do. He already has no issue scoring when guys are on him, so give him a foot of empty space and he’ll be exploiting your team in no time.”

Along with McGroarty, there are a ton of U.S. Region forwards that could hear their names called in the first round of the 2022 NHL Draft. This includes right-wingers, Frank Nazar and Jack Devine, left-wingers, Isaac Howard and Cutter Gauthier, along with centers, Logan Cooley and Jack Hughes, who all played in the USDP last season for the U17 and U18 U.S. National Teams.

Nazar (5-9, 163), “is the definition of dynamic,” says DraftPro Scout Joseph Peters. Like McGroarty, Nazar played in the U15 AAA League as a 15-year-old for Honeybaked, where he put up some more than impressive numbers, posting 127 points (49 goals, 78 assists) in 55 games. He continued that success last season playing for the U.S. National U17 Team in the USDP by averaging more than a point per game, scoring 55 points (28 goals, 27 assists) in 45 games.

Peters went on to say, “He is highly creative, anticipates the progressing play well, and generates many scoring chances for himself and his linemates. Nazar is one of the best stick handlers in his age group. He’s a competitive forward with the will to forecheck like a maniac. There is no doubt he is a dynamic forward who can put up points.”

Taxman continued on saying, “Devine’s shot is his best weapon. His wrist shot is lethal and he can bury it from range. He’s excellent at playing both the half-wall and the bumper position on the powerplay, ready to crush one-timers at all times.” Taxman also added, “Defensively, Devine has a strong stick and he’s physical. He has the ability to play center, but I think his game is better suited for the wing.”

Howard (5-10, 174), has a knack for putting the puck in the net. In 2019-20 his seven goals in four games for Team USA at the Youth Olympics was good enough for second most goals in the tournament, finishing two behind 2023 NHL Draft eligible Russian phenom Matvei Michkov who had nine. Howard and the U.S. eventually brought home a silver medal after losing to Michkov and the Russians in the gold medal game. Last season he split time between the U.S. National U17 and U18 Team in the USDP. He scored 54 points (27 goals, 27 assists) in 34 games for the U17 Team and followed that up by averaging more than a point per game for the U18 Team where he put up 19 points (five goals, 14 assists) in 17 games.

Gauthier (6-2, 190), “is a talented winger who loves to fire the puck on the net,” says Peters. Like Isaac Howard, he was also a member of Team USA at the Youth Olympics in 2019-20, where he helped bring home a silver medal, scoring one goal over four games. Last season he played for the U.S. National U17 Team in the USDP where he tallied 37 points (20 goals, 17 assists) in 44 games. Gauthier is currently the 23rd ranked prospect overall on the DraftPro 2022 preliminary rankings list.

“He is a fine puck handler, able to maneuver and roam around the ice to create himself a better shot opportunity. He shows an interest in fast starts, putting the pedal to the metal, when an offensive rush can turn into an outburst of opportunities. Offensively consistent, shooting and playmaking, with the typical winger lag in the defensive category of the game,” added Peters.

Logan Cooley (5-10, 179), is a solid two-way center who split time last season playing for the U.S. National U17 and U18 Team in the USDP. He put up 32 points (16 goals, 16 assists) over 28 games for the U17 Team and 14 points (four goals, 10 assists) over 19 games for the U18 Team. He also put on his nation’s colours for Team USA at the 2020-21 IIHF U18 World Junior Championship where he recorded two assists in five games, before heading home after a quarterfinal loss. Cooley currently ranks as the 14th prospect overall on the DraftPro 2022 preliminary rankings list.

Jack Hughes (6-0, 165), is currently the 18th ranked prospect overall on the DraftPro 2022 preliminary rankings list. This Jack Hughes has no relation to NHLers Quinn and Luke Hughes and is not to be confused with 2019 first overall pick of the New Jersey Devils, Jack Hughes. Last season he played for the U.S. National U18 Team where recorded 34 points (eight goals, 26 assists), in 38 games. He suited up for Team USA at the 2019-20 World U17 Hockey Challenge where he won a silver medal and averaged more than a point per game, contributing with seven points (three goals, four assists) in six games. The seven points were good enough to tie him for second in points for all 2022 NHL Draft eligible players in the tournament.

Those are seven U.S. Region forward prospects that are definitely going to gather a lot of attention from scouts over the upcoming season. Rounding out the ten U.S. Region prospects to watch for this season are three defensemen, Seamus Casey, Ryan Chesley, and Lane Hutson, who all played in the USDP last season.

Casey (5-10, 161), “is an elusive skating, high octane, offensive defenseman,” says Peters. Casey, a right-handed defenseman, played last season for the U.S. National U17 Team in the USDP where he put up some impressive numbers, posting 36 points (eight goals, 28 assists) over 46 games. He is a defenseman that should hear his name called pretty early at the 2022 NHL Draft. Currently on the DraftPro 2022 preliminary rankings list, he sits in the top 10 as the 10th overall ranked prospect.

Speaking with Peters, he mentioned a lot of good things about Casey’s game, “He is like an extra forward in the offensive zone. Crazy skating ability that easily allows him to join rushes. He can skate circles around defenders with insane edgework and pivots. Casey has silky hands and accurate shot placement that get his team countless opportunities to get on the scoreboard. He is highly intelligent and creative in the offensive end of the ice.”

Chesley (6-0, 187), is a right-handed defenseman who split time playing last year for the U.S. National U17 and U18 Team in the USDP. Last season he averaged just under a point per game with the U17 Team, scoring 34 points (11 goals, 23 assists) in 37 games. Over 12 games he registered two points (one goal, one assist) for the U18 Team. He suited up in 2019-20 for Team USA at the Youth Olympics and put up three points (one goal, two assists) along with taking home the silver medal. Chesley is currently the
20th ranked overall prospect on the DraftPro 2022 preliminary rankings list.

Hutson (5-6, 165), is a left-handed defenseman who only stands at 5’6”, but, don’t let his size fool you, this kid can play. Last season he split time with the U.S. National U17 and U18 Team in the USDP. Over 39 games he put up 19 points (four goals, 15 assists) for the U17 Team to go along with eight points (one goal, seven assists) in 10 games for the U18 Team. Hutson dawned the Team USA colours at the 2020-21 IIHF U18 World Junior Championship where he averaged a point per game, scoring five assists in five games, before eventually losing out in the quarterfinals. Those five points were good enough to tie Russian prospect Vladimir Grudinin for most points in the tournament for 2022 NHL Draft eligible defensemen. Hutson can certainly be a prospect that can rise up the draft ranking boards this season.

For more on the U.S. Region prospects and the 2022 draft class be sure to pick up a copy of our 2022 Draft Preview Magazine available this fall.