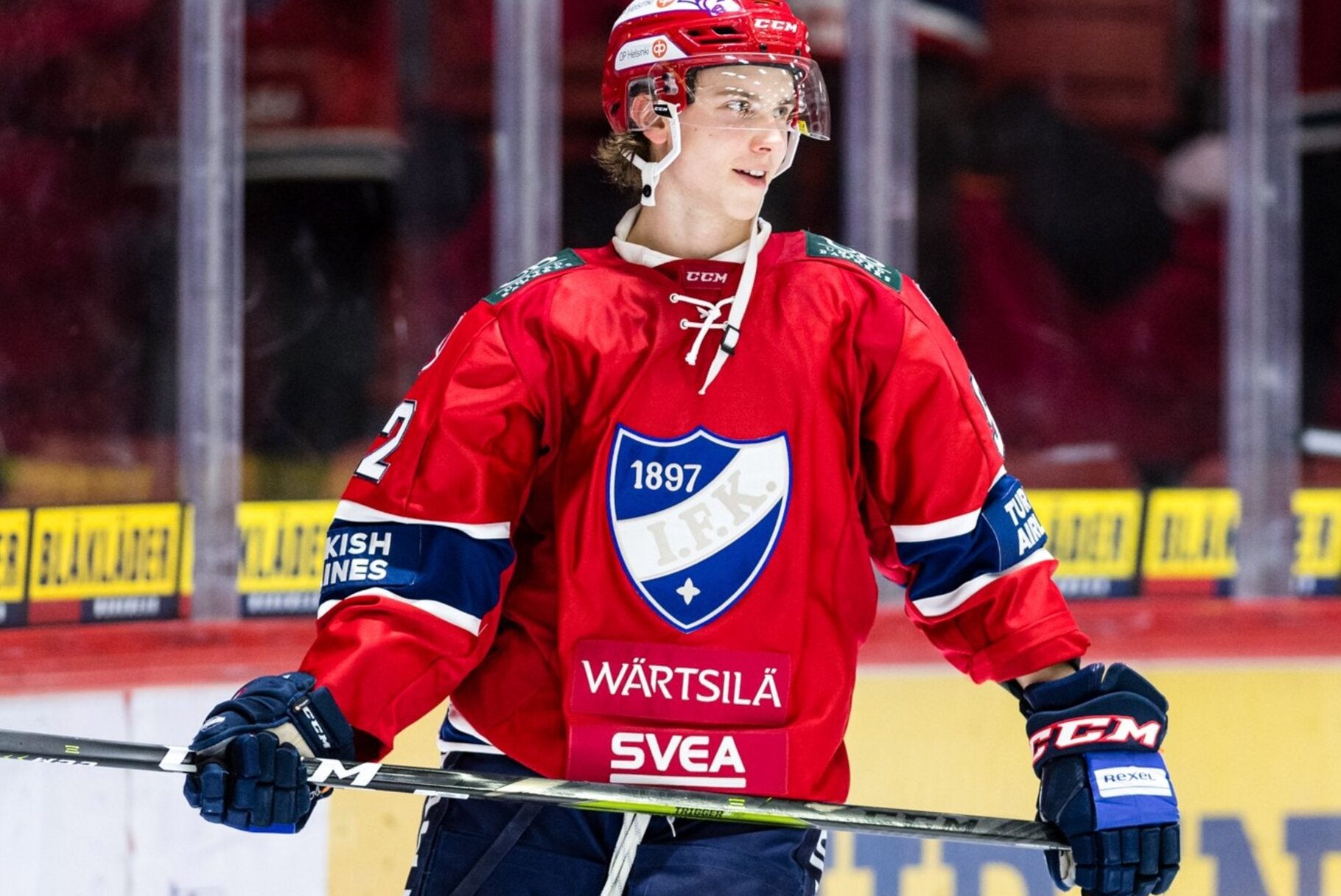 DraftPro Head Scout Jared Brown had this to say about the highly touted prospect, “Speed Kills. That’s how I would describe Lambert’s game. His puck handling ability is NHL like. His acceleration through the puck is some of the best I’ve seen out of recent draft eligible prospects.” Another DraftPro scout Alex Taxman joined in on the Lambert parade by saying, “He’s also one of the most accurate snipers eligible for this draft. Lambert can pick corners from a serious distance, and has a bomb of a one-timer. He projects as a top line scoring forward with all-star potential.”

Brad Lambert is the clear number one Western European prospect on DraftPro’s list but there are plenty of other intriguing prospects. Rounding out the DraftPro top five Western European prospects are defenseman Simon Nemec of the Slovak Extraliga, right wing Juraj Slafkovsky of the TPS Under-20 team, defenseman David Jiricek of HC Plzen and Djurgardens IF center in the J20 Nationell, Noah Ostlund.

Nemec (6-1, 192), is an offensive defenseman who can lead the rush, and also quarterback a power play. He put up 19 points (two goals, 17 assists) in 37 games with HK Nitra in the Slovak Extraliga last season. More recently the 17-year-old impressed at the 2021-22 Hlinka Gretzky Cup where he helped the Slovaks capture a surprise silver medal by contributing with six points (one goal, five assists) in five games, which was good enough for him to finish the tournament tied second in points among all defensemen.

“Nemec is already an extremely polished defenseman. His hockey sense is elite and he can process the game at high speeds.” Brown says when asked about the player, “The composure Nemec exudes and his high level of intelligence is quite magnetizing and makes him currently the highest ranked defenseman for the 2022 draft.”

Slafkovsky (6-4, 218), “Plays like a well oiled machine.” says DraftPro scout Joseph Peters. He put up some pretty good numbers last season in the U20 SM-Sarja for TPS U20 notching 13 points (eight goals, five assists) in 16 games. He, like fellow teammate Simon Nemec, was also on the Slovakian team that won silver at the 2021-22 Hlinka Gretzky Cup. The big left winger averaged a little under two points per game, scoring nine points (three goals, six assists) in five games. Those numbers were good enough to tie him for second among all eligible 2022 NHL Draft prospects in the tournament.

Peters went on to say, “His size can be deceptive as he can turn defenders inside out with his agility and silky hands. He is fearless of going one on one. Full of relentless drive and determination, he can drive down the wing like a locomotive, setting up a backdoor pass or ripping a shot top corner.”

Jiricek (6-3, 183), a Czech born right-handed defenseman who “is an intense competitor at both ends of the ice,” said DraftPro Head Scout Jared Brown. Jiricek scored nine points (three goals, six assists) in 34 games for HC Plzen in the top Czech men’s league last season. This helped him be named as the Czech Extraliga’s 2020-21 Rookie of the Year. The 17-year-old will look to build on that again this year by getting another year under his belt with HC Plzen.

Brown spoke very highly of Jiricek saying, “He comes with the same energy every game and even against older competition as he showed last year. He shows solid offensive instincts and will attack past the faceoff circles while scanning his options. He’s very raw in his abilities but the ceiling is very high to be an all-situation type defenseman.”

Noah Ostlund (5-10, 161), is a solid playmaking center who can also play wing. Last season with Djurgardens IF in the J20 Nationell he registered 15 points (seven goals, eight assists) in ten games. This was good enough to earn Ostlund most points by an U17 junior in the J20 Nationell League. He also attended this year’s 2021-22 Hlinka Gretzky Cup for Sweden and contributed two points (two assists) in five games, helping them win the bronze medal.

“He is a crafty playmaking center. Plays with high intensity, always moving on and off the puck. The effort he puts in defensively to disrupt plays makes him a solid two-way forward.” said DraftPro scout Andrew Leblanc about Ostlund.

Like Noah Ostlund there are a lot of Swedes that will look to hear their names called in the first round of the 2022 NHL Draft. This includes a fellow teammate of Ostlund’s, left winger Liam Ohgren of Djurgardens IF in the J20 Nationell. Also, Filip Bystedt (center) and Mattias Havelid (defenseman), are teammates who play for Linkoping HC in the J20 Nationell, and another J20 Nationell player in defenseman Elias Salomonsson who plays for Skelleftea AIK.

Liam Ohgren (6-1, 187), is the son of Andreas Ohgren, a popular personal trainer in Sweden, who has trained some big names in the NHL including Nicklas Backstrom, Gabriel Landeskog and Niklas Kronwall. Liam put up six points (four goals, two assists) in eight games last season for Djurgardens IF in the J20 Nationell. He followed that up this year at the 2021-22 Hlinka Gretzky Cup with seven points (four goals, three assists) in five games, en route to winning a bronze medal with Sweden.

“I was most impressed by his intelligence, his puck facilitating ability and the level of maturity he showed in his game,” said Brown. “He has the explosiveness out of his edges and turns to spin away from pressure which is something NHL scouts really look for. I fully expect Ohgren to be an A-tier prospect in the upcoming draft and 1st round candidate.”

Filip Bystedt (6-3, 181), is a big two-way center who plays for Linkoping HC in the J20 Nationell. Last season for them he scored 12 points (five goals, seven assists) in 15 games as a 16-year-old. Filip also attended the Hlinka Gretzky Cup this year and was on the same line as Liam Ohgren. They complimented each other well as Bystedt also put up seven points (three goals, four assists) in five games along with adding a bronze medal to his resume, as he looks to rise up the draft rankings this season.

Mattias Havelid (5-9, 168), is a right-handed defenseman that can move the puck with ease and has a real ability to create plays in the offensive zone. Last season he played with fellow teammate Filip Bystedt for Linkoping HC in the J20 Nationell where he contributed with six points (six assists) in 12 games. He joined Bystedt at this year’s Hlinka Gretzky Cup and really impressed, putting up nine points (two goals, seven assists) in five games. That was good enough to lead all Swedish skaters in points, as well as all defensemen in the tournament by a whopping three points.

If the Havelid name sounds familiar you would be correct, as his Father Niclas Havelid played in the NHL over nine seasons, splitting time with the Anaheim Mighty Ducks, Atlanta Thrashers and New Jersey Devils. Mattias also has a twin brother Hugo who is a 2022 NHL Draft eligible goalie and joined him in winning bronze on Team Sweden, both at the IIHF U-18 World Junior Championship in 2020-21 and the 2021-22 Hlinka Gretzky Cup.

Elias Salomonsson (6-2, 183), is a solid two-way defenseman with great hands and is amazing at moving the puck. He plays for Skelleftea AIK in the J20 Nationell. Last season as a 16-year-old he impressed by putting up 15 points (four goals, 11 assists) in 14 games. That was good enough to lead all defensemen in assists (11) and points (15) in the entire J20 Nationell League.

Brown had a lot of good things to say about Salomonsson, “He’s got outstanding mobility and is an incredibly smooth skater. He pairs his skating with his hockey IQ and visions to easily transport the puck from his own end. He’s a composed puck handler using a high grip to protect pucks away from forecheckers while keeping his head up.”

We would need all day to talk about all the talented prospects from Sweden in this upcoming 2022 NHL Draft as there are a lot of them, but like the old saying goes, “All Swedish, No Finnish.” This next prospect can “Finnish” with the best of them.

Joakim Kemell (5-11, 176), “He’s a pure goal scorer.” says Brown. Last season playing for JYP in the U-20 SM-Sarja league, Kemell posted some impressive stats, scoring 36 points (22 goals, 14 assists) in 38 games. He followed that up at the 2021-22 Hlinka Gretzky Cup averaging a goal per game by posting six points (five goals, one assist) in five games, where he and the Finns eventually lost to Sweden in the bronze medal game.

Brown added, “He constantly looks at putting pucks on net with a shot heavy mentality. Kemell has an elite level release and is a consistent threat on the powerplay from the faceoff circle. He also has a feisty side to him and is willing to throw his body around.”

Today you’ve been introduced to a lot of Swedes, a couple of Finns and Slovaks, plus a Czech. These are ten Eastern European Prospects you will become more familiar with over the course of this season in the lead up to the 2022 NHL Draft. The next and last prospect on DraftPro’s list to watch for is a German player whose name might not be very familiar yet to some.

Julian Lutz (6-2, 179), is an effective two-way forward who is an excellent skater. Playing for RB Hockey Juniors in the AlpsHL last year, he put together a very solid season posting 26 points (13 goals, 13 assists) in 31 games. He was part of a weak German team at the 2021-22 Hlinka Gretzky Cup that was outscored 27-10 over four games. However, Lutz came up big in the fourth and final game for the Germans against Switzerland. He scored Germany’s only two goals that game and added another one in the shootout to help Germany capture seventh place with a 3-2 win as he finished the tournament with two points (two goals) in four games.

“Lutz is a quick forward that can fly down the left wing and make plays at top speed,” says Leblanc. He followed that up by saying, “His combination of great creativity and an excellent compete level could see him fly up draft boards this year.” Lutz will be playing in the DEL, the top tier men’s league in Germany for EHC Munchen this season as he looks to improve his draft stock.

For more on the Western European prospects and the 2022 draft class be sure to pick up a copy of our 2022 Draft Preview Magazine available this fall.