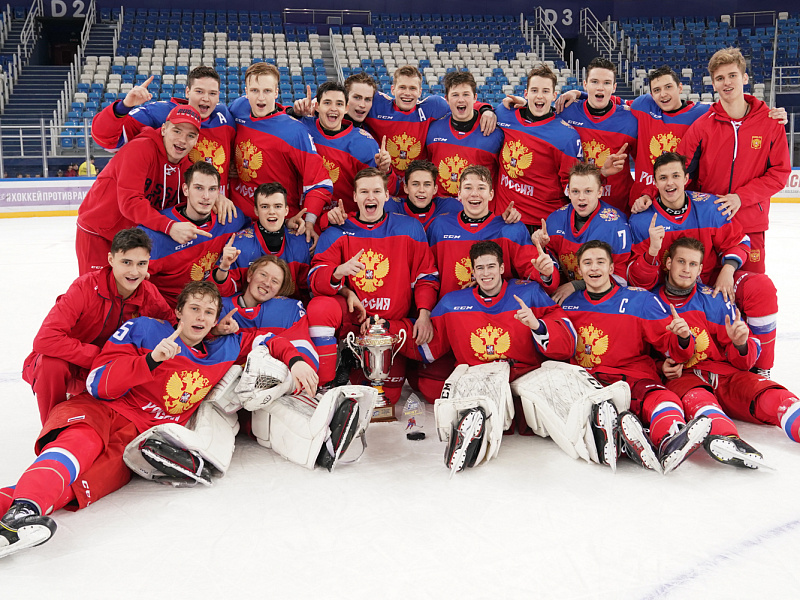 The 2019 Five Nations Tournament from Feb. 5-9, 2019 at the Iceberg Skating Palace in Sochi, Russia became a must-see, emphatically circled event on the calendars of NHL scouts back in November after witnessing the upcoming drafts top talent, NTDP U18 centre Jack Hughes, light up the U18 competition at the fall 5 Nations event to the tune of a ridiculous sixteen points in four games.

But when the event started the powerhouse U.S. National Under-18 Team found themselves on the ice playing without the U18 squads top player and top ranked prospect for the 2019 NHL draft, Hughes. Hughes has stayed home, halfway round the world, in Michigan as he was nursing a lower-body injury, while his teammates took on entries from Russia, Sweden, Finland and the Czech Republic, all hockey powers with impressive draft talent on their rosters.

Plenty of scouts and NHL executives made the trip to Sochi, despite the news on the American star’s injury, to catch the on-ice action and came away impressed with the talent on display despite the showcase missing Hughes and projected No.2 overall Kaapo Kakko of Finland. The third ranked prospect, winger Vasili Podkolzin, was at the event but did not see action in all the games thanks to a game misconduct and subsequent one game suspension he received against the Finns.

But because of the missing marquee names others were able to showcase their talents such as American centre Trevor Zegras who led the event in scoring with seven points in the four games and Swedish two-way defenseman Tobias Bjornfot who led all defenders with six points.

Russia won the event on the backs of some strong talent at forward and on defense. Winger Vasili Podkolzin was the name many were excited to see and the electric two-way winger did not disappoint in the limited time he was on the ice but center Yegor Spiridonov and wingers Arseni Gritsyuk and Yegor Chinakhov also showed well.

Spiridonov brought his effective two-way game giving a full 200-foot effort each shift. His puck skills really impressed, but it was his hustle that stood out. He battled hard and won loose pucks and displayed a great work ethic. He was difficult to knock off the puck and really showed the strength that he possesses. He has a very strong and powerful shot and although it wasn’t entirely accurate, he created chances.

Gritsyuk, a quick skating, elusive, undersized right winger, played a very impressive puck possession game and liked to go to the difficult areas of the ice to try and find scoring chances, displaying a heavy shot when the opportunity arose. Chinakhov, a speedy winger, has a strong body, and that combo really allows him to protect the puck and be a reliable puck carrier in all three zones. He was a streaky player who shoots the puck hard but when he had it going, he was a nightmare for his opponent.

Chistyakov is a smaller rearguard but was impactful playing a ton of minutes, demonstrating excellent two-way play and phenomenal skating ability. Not afraid to play physical and make a big hit, he read and reacted to the play very efficiently. He was a bulldog without the puck and controlled the pace of play with the puck. Responsible for playing in all situations, he was the go-to guy for the Russian blue-line.

The Americans, sans Hughes, looked strong as a group led by Zegras, Cole Caufield and Alex Turcotte up front. This was especially the case for Zegras who played in his natural center position for the Americans and really excelled. Zegras showed off phenomenal all-encompassing skating and agility as well as the top-end vision, creativity and offensive skills driving the offensive play.

Caufield continued to be the goal scoring threat he has been all season, with or without Hughes, and consistently put himself in position to succeed. Turcotte, who had been injured for the majority of the season, looked dangerous offensively and did many of the other off puck things for his line to be successful. Turcotte displayed his blazing speed, excellent vision and compete level throughout the tournament.

Lastly, we were impressed with depth center John Beecher and the physicality he brought in Sochi. Beecher is a strong two-way pivot who has a strong and powerful skating stride and soft hands to boot. Beecher certainly looked like a prototypical power center over the course of this tournament with how much he liked to hit and muck things up around the crease and in the corners.

The Finnish entry had a bunch of intriguing names to watch as well with Patrik Puistola, Antti Saarela, Leevi Aaltonen and Antti Tuomisto all catching our eye. Puistola has been on a goal scoring tear this season after being loaned to LeKi of Mestis from Tappara. In Sochi he was highly creative, read the ice extremely well and had the puck skills to create space and generate scoring chances.

Despite his smaller frame Saarela demonstrated a strong willingness to engage in physical play this tournament and seemed to blend speed with smarts and a strong 200-foot game. He is a very noticeable player on the ice because of his speed and acceleration. Aaltonen is a quick but undersized winger who plays a fearless game which includes driving hard to the net. He also has an excellent goal scoring ability with his strong, quick, and accurate shot which showed on the score sheet to the tune of three goals in the four games.

Tuomisto is a big defenseman who demonstrated solid potential NHL upside during this tournament. Not afraid to play physical, Tuomisto made opponents have to fight for every inch of ice. He showed the ability to make high-end passes and reads while using his reach and range to be very solid in his own zone.

The Swedes were led by wunderkinds Alexander Holtz (2020 eligible) and Lucas Raymond (2020 eligible) offensively but also had a couple prospects NHL scouts were looking at for this draft in defenders Tobias Bjornfot and Albert Johansson.

With both Philip Broberg and Victor Soderstrom absent from this tournament, it was Bjornfot’s time to shine. And shine, he did. Consistently demonstrating his fantastic mobility, he was able to show just how dangerous he is in transition. He’s not a flashy defensemen and plays an all-around no-nonsense game. He carries the puck up the ice with his head up and with grace and poise beyond his years. He reads the ice extremely well and played with a lot of confidence as seen in the offensive scoring chances he created.

Johansson, a graceful skating blueliner in his own right, was at his best when skating the puck up the ice looking to create offense. But in his own zone he was also effective playing the body, keeping close gaps on his check and closing off lanes with his stick. He showed some solid NHL potential with his passing ability and his on-ice reads that have NHL scout excited at a possible mid-round sleeper.

The Czech Republic entry was overmatched at this event but still held a few names that moved the needle as far as scouts were concerned. Forwards Michal Teply, Adam Najman, Martin Beranek and defender Jan Klodner were all names that caught the attention of NHL scouts in Sochi.

Teply was the Czechs top goal scoring threat from the wing as he moved that big frame around, managing the puck and putting himself in advantageous position to get scoring chances. He looked like he was processing the game at a high level staying one step ahead of those trying to keep him in check.

Najman, a center, was the teams hardest working player as he played with a relentless motor and brought a strong two-way game, contributing to the offensive rush, driving back to cover his assignments as well as winning many key face-offs for his squad. Beranek played a fast and energetic game from the wing. Drives into the zone hard on the fore-check, disrupting opponents and creating opportunities for turnovers. His shot was a weapon as it is heavy and he knows how to get open to use it.

Lastly, defenseman Klodner played a hard-nosed defensive game in his own zone where he spared no one a cross-check to get them out of his goaltenders sightline. He was also able to join the offensive attack on many occasions started the transition with a good pass.

With notes from Mario Liberati, Ian Pulz and Dan Stewart.