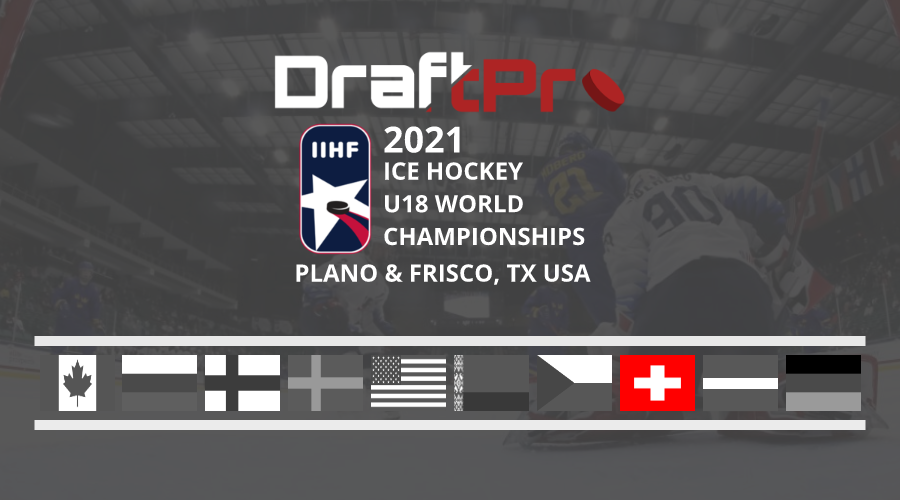 Switzerland had quite an interesting tournament to say the least. They’re not very big, and not very skilled, yet they managed to hang around in a couple games, notably vs Sweden. They controlled a large portion of that game, until a devastating five-minute major penalty turned a 1-0 lead into a 3-1 deficit. The penalty kill didn’t just struggle against Sweden, they had massive issues against Belarus, and that was surprising for a team that defended well at five on five.

The Swiss team was blown out by both Belarus and Canada, but played extremely tough, tight games against both Sweden and Finland. This tournament was another example that they can compete with the higher end competition although they lack the premier talent needed to turn those games into wins.

Here are some player reports from our crew on the Swiss U18 players that stood out.

Zanetti had a strong tournament moving the puck under pressure and despite being outmatched, he was good defensively. Strong below his goal line, shielding the puck through contact letting his back take the brunt of the blow and keeping the puck in front of him. Terrific control downlow understanding the pressure coming at him and smartly moving the puck 10 feet or so to start the breakout. Short range passes were clean and executed. Plays with a calm demeanor starting the transition. He isn’t the cleanest puck carrier as he is more effective passing it off then carrying it all the way. In previous viewing, we saw him making more soft, skilled plays in the neutral zone and Ozone but did not seen those same plays at the U18s. Solid neutral zone reads to close his gaps. Smart, accurate reads normally lead to turnovers. Strong edgework keeping him mobile and defending laterally well. Fearlessly getting himself into shooting lanes to block shots for his netminder. After the whistle made it known to not touch his goalie or be near him as he will dump you to the ice. He can be a little timid in his in-zone defense where he stays boxed into protecting the front of the net area. We see potential for Zanetti to become a two-way defenseman. He makes a lot of smart plays throughout the course of a game and his skating is intriguing to the point that he is worth a pick sometime in the later rounds.

Sidler is a tiny defenseman that will be competitive in man-on-man physical battles but does not have the strength to be effective against stronger opponents. Gets easily shed and needs to play to his strengths. Those are his ability to skate the puck in transition and play a fast puck moving game. Quick feet. Swift linear crossovers darting out of his zone. Doesn’t have the strongest stride but when the feet are moving fast and he is using his inside edges to evade players, that is where he is at his best. Soft touch with the puck. Good use of small chips or flip passes. We liked his foot speed defending the rush and using his stick drive attackers out wide. Had a good game against the rush not allowing a lot by him. His stick is his best asset defensively and needs to use it actively to sniff out pucks off the puck carrier. When the attack is set up, he gets stagnant with his positioning and looks a bit lost. He can be late to lanes or cutting off the man which means he has to out battle his opponent and again, he doesn’t have the physical strength to do that. We would be surprised to see Sidler be picked in July as unfortunately his size is a major issue and we don’t see high-end abilities or talent to counter it.

Hard to believe the towering 6’5” defenseman is a 2004 born and not eligible until 2022 meanwhile you know NHL scouts saw this game and were licking their lips seeing what young Bichsel could turn into. Though his foot speed isn’t something to rave about, he has a strong yet smooth stride that is effective in playing north-south hockey. Has a ton of poise as the puck carrier leading the attack. Went for an end-to-end rush showcasing good skill with the puck and driving hard to the net getting a dangerous scoring chance off. Edges can see improvements, turns and pivots are slow. Showed solid patience at the top of the blue on the PP. Big body, incredibly hard to knock off the puck. Strong puck protection combining both his size and long reach. Super heavy on the puck and leaning his stick over top of the oppositions. Great outlet passes leading to controlled zone exits. Liked the use of occasionally using the boards to lead his passes. Uses his stick to seal off passing lanes on the PK. Makes smart reads to close gaps as attackers enter the zone, actively looking to shut them down at his blueline. Will use his size to his advantage in board battles but we wouldn’t classify him as an overwhelming physical presence. Could use his size more defensively. Bichsel has the potential to become a top four two-way defenseman and terrific upside as a puck moving defenseman as the confidence is already there.

Henry was a Swiss player to catch our eye as his fast puck movement created some chances for his line. Quick puck distribution skills and vision. Efficient moving it in transition. Unfortunately, he isn’t lightning quick which is something he would need to be considering his height. Smooth puck control. Fast offensive instincts to complete passes under pressure. Off the puck he supported his teammates well. While we liked Henry’s game, he does not exhibit a single elite trait and the size is an ultimate downfall that will be a reason why he goes undrafted in July. If he can improve his foot speed and up his acceleration to be more dangerous in transition, using his speed and puck control to be more impactful, then down the road we could see Henry’s name pop up possibly at the World Juniors or another international tournament for the Swiss.

Robin has got the wheels and was an effective piece on this team, handful of times he was the guy entrusted with getting the biscuit over the blueline with energetic and explosive skating. He was awarded a penalty shot but unfortunately his hands were pretty predictable and basic. But we give Robin credit where credit is due, his footwork is electric and he blends in some good core balance to go along with his small frame. He’s not afraid to take that extra step and lean into a defender to gain that extra inch to get to the net. His shot is pin-point accurate and he gets it off really quickly. Not sure if a shot and speed will be all he needs to make that next leap, but he was very tough to ignore, his skating is visibly a cut above his peers and as the rest of his game catches up with his skating, it could possibly make for a lethal winger. Later round project pick or unselected and might get a look next season.

A skilled finesse player that thinks the game well. Most of his good work it hunting the puck on the forecheck where he uses his energy to spark his team. He has a quick stick and is excellent creating pressure. Not afraid to throw a hit and get in on the body he will play physical. Decently strong lower body and protects the puck well. His upper body could use some work as he needs to be stronger on his stick. He was struggling in this tournament to create offense on the top line and on the top power play unit in the slot and net front where he seemed to rotate. Defensively he has a high IQ and can play down your line up due to this. He thinks the game well and understands man on man coverage while not losing his guy. He has a decent motor but it seems to come and go shift to shift. We would love to see him bring that energy throughout the entire game. He does seem to play a bit on the outside and I would love to see him get in to traffic a bit more. He loves the saucer pass and throws it even when not necessary at times. His ability on the penalty kill helps his draft status as he shows other tools he brings to the game. We think he has an ability to play lower down the line up and still create a bit of secondary offense. A later round option. He could be a project and need a few years to develop and play pro hockey before he arrives in the NHL.

I was intrigued to get a closer look at Reichle’ s game… third in points in the U20-Elit league despite playing less games than his peers?.. he drives a hard bargain. While he was out there I was keeping a close eye mainly on his abilities on the powerplay and in the offensive line, playing on that top line, he was bound for a majority of his ice time in Sweden’s end… and I’m unfortunate to report, there isn’t much to report on with Reichle’ s game. There’s not much to his skating when he makes zone entries, in fact I’d say he’s on a bit of the slower end. With time and space in the offensive end, he was a noticeable asset on the powerplay as his decision making was like clockwork, but I found he had trouble getting the puck to the real high danger areas, as he went for a handful of low-percentage chances when push came to shove. He’s got an alright vision for the game, but I don’t think it’s anything that can translate to a higher level. If he really was a next level talent in Switzerland, I would’ve imagined he’d got to see time in the SL or NL at some point… and as he’s playing guys with pro experience at the U18’s, reality is hitting him like a sack of bricks.

Sidler led the team in scoring with three points in five contests with Robin, Bichsel and Biasca all tied for second with two points each. The three best Swiss players of the event were named after the quarter-final: Dario Sidler, Lian Bichsel, and Kevin Pasche.