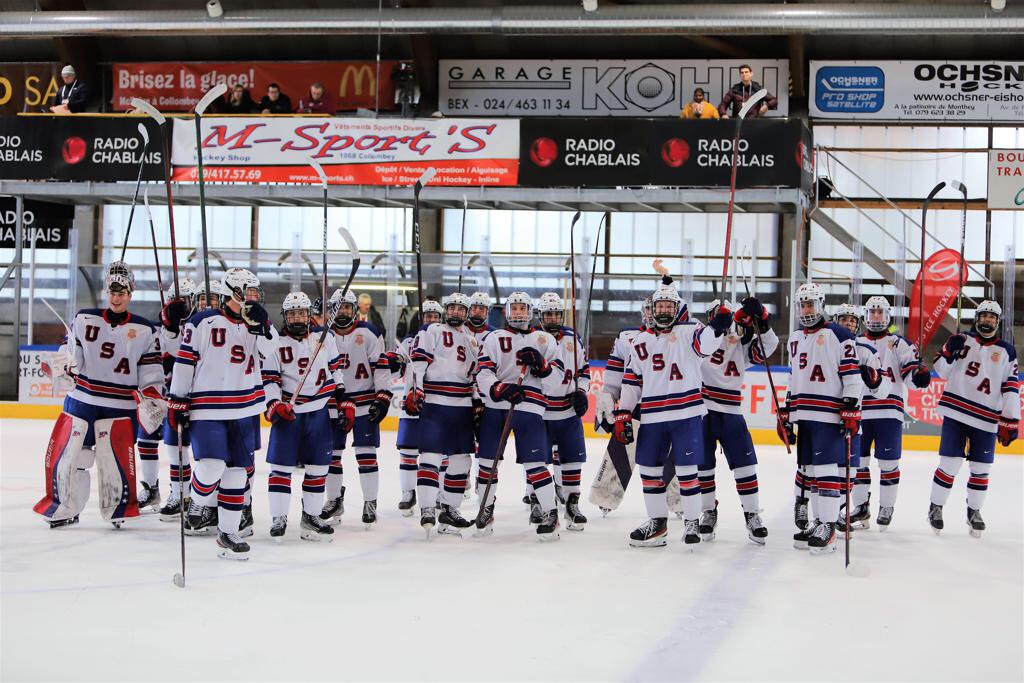 MONTHEY, Switzerland – This tournament went pretty much how I had figured it would have. The ultra dominant USA team coming out on top, followed by Sweden and Finland. The surprise was Switzerland picking up a shut-out win over the Czech Republic for their first win in an international tournament in I don’t know how long. Below is a breakdown of the teams and some players that were noticeable for me.

Team USA:
This is such a dominant team that it made it difficult to see who the best player could be on this roster. There were so many options to choose, and I really liked quite a few of them. Isaac Howard with his seven points (4G, 3A) and is ability to get the puck on net so well. He managed to get 19 of his 33 attempts through and on net for a SOG. Jimmy Snuggerud with is two multi point games and getting six goals with just eight shots on net (27 attempts) is impressive. He’s such a good shooter and is able to select his target so accurately. Logan Cooley’s impressive performance in the face-off circle (38-19 for 67% win%) is a tournament leader in that category and he’s such a dynamic two-way player who can skate, pass and shoot so well. Plus he shows such great awareness and IQ when he’s on the ice. Or Lane Hutson’s total domination on the back end. His skating is so smooth and his passing is just so on point. He sees the ice so well and is able to control play each time he’s steps on the ice. Not to mention his 116 total shifts and his game average of 20:37 of ice time through the whole tournament. The American’s are certainly going to have a lot of top end NHL draft selections this year. I can’t wait to see how the World Juniors pans out for them. I have them penciled in at #1 there.

Team Sweden:
While they didn’t score a lot of goals, 14 total, they were dominant through most of their games. In the loss to the USA, they seemed a little defeated when the score got away from them, but they never really quit. Finland gave them a run for their money, but they prevailed there and looked good doing so against their international rival. Defenseman Filip Nordberg stood out for me (not just because he’s 6’4″) but because he was able to play so smart with the puck and was so strong defensively. His puck control was a little lacking at times, but he still showed that he has that ability and he also used his reach so well. He could either poke the puck away from an attacker or move the puck farther away and shield it well when he had it. His defensive game was also pretty strong and was one of the surprises for me. Calle Odelius was impressive with his puck moving, skating ability and his consistent play. Then there was Tim Almgren. He stood out for me on this team. His two-way play and his hockey sense were impressive. He played well on both sides of the puck and never quit. While I think this team didn’t have the depth like the Americans, and no one did, they still showed some really solid skill and there are quite a few players on this roster that are going to be called out in the first three rounds of the NHL draft.

Team Finland:
Finland was a solid choice to be third place here. They didn’t quite have the depth that Sweden did, but they could match them well in the skill department. They played similar game styles and if they were able to capitalize on a bounce or two more, they would have been second place. A couple of players who stood out for me on this roster were Kasper Kulonummi and Topi Ronni. Kulonummi was a defender who logged the most shifts, had the most average ice time/game and played the most on the PP. He showed really good vision with the puck and was very good with his passing ability. He was his teams assist leader and I thought he was one of the best and more reliable players on this roster. Topi Ronni was another player who stood out for me as he was someone who never stopped. He was always in motion, showed good puck control, passing and patience. He was a player that when he jumped on the ice, he was noticeable each shift. Some others that I noticed were Tommi Mannisto and Aleksante Kaskimaki. Kaskimaki for his shooting and his ability to label corners at will and Mannisto for his skating and ability to wear down teams with his grinding style. There are some solid NHL prospects on this roster and I’m sure some of them will go in the early rounds (1-3), and I’m looking forward to seeing how some of them perform at the World Juniors.

Team Switzerland:
As a team who only managed to score four goals the entire tournament, it’s hard to think they finished above someone else. But they did with the work from players like Simone Terraneo, Noah Greuter and goaltenders Alessio Beglieri and Loris Uberti. Terraneo was a solid defender who was an absolute minute muncher for his team. He took a total of 125 shifts and played an average of 20:17 per game. While Greuter was the teams leading scorer with two, count em two (1G, 1A) points. He played well on this left side dominant team by driving to the net and making the most of each shift he had. While Beglieri and Uberti split starts at two each, they only allowed a combined 16 goals past them. When you’re playing teams like Sweden, Finland and the USA, that in itself if pretty impressive. They faced a lot of rubber and still gave their team a fighting chance each game. While at times this team looked overwhelmed, they never gave up, and they were rewarded with a win over the Czech Republic for it. While I don’t feel there will be many names called out at the NHL Draft from this roster, there are a few that could be selected in the later rounds I think.

Team Czech Republic:
A disappointing finish for the Czech’s in this tournament. Having kept games close between Sweden (2-0 L), Finland (5-4 L) and Switzerland (2-0 L), they just weren’t able to make it all come together to grab a win. They did have some players that impressed me with their drive and skill however. Ales Cech was one such player who I thought played very well through the whole tournament. He was able to put 12 of his 27 total shot attempts on target and was a solid, minute munching defender who played in every situation. He showed a really strong defensive game and was always tasked to shut down the oppositions top players. If it wasn’t for him and his defensive play during the US match-up, the score would have been much worse for the Czech’s. Another player I enjoyed and thought was a stand out on this roster was Adam Dvorak. He just never stopped moving his feet or attacking the puck. He has fast feet and a shot that is a laser. While he is more offensive minded than defensive, he still managed to play well in his own zone. Always a constant threat each shift and determined as can be. Dvorak was also one of a handful of players who managed to stay even in the +/- category while his team was out scored 18-5 (if that means anything to stat heads). While I feel there is some real strong skill on this roster, those who go, are going to need to pull it all together come the World Juniors.