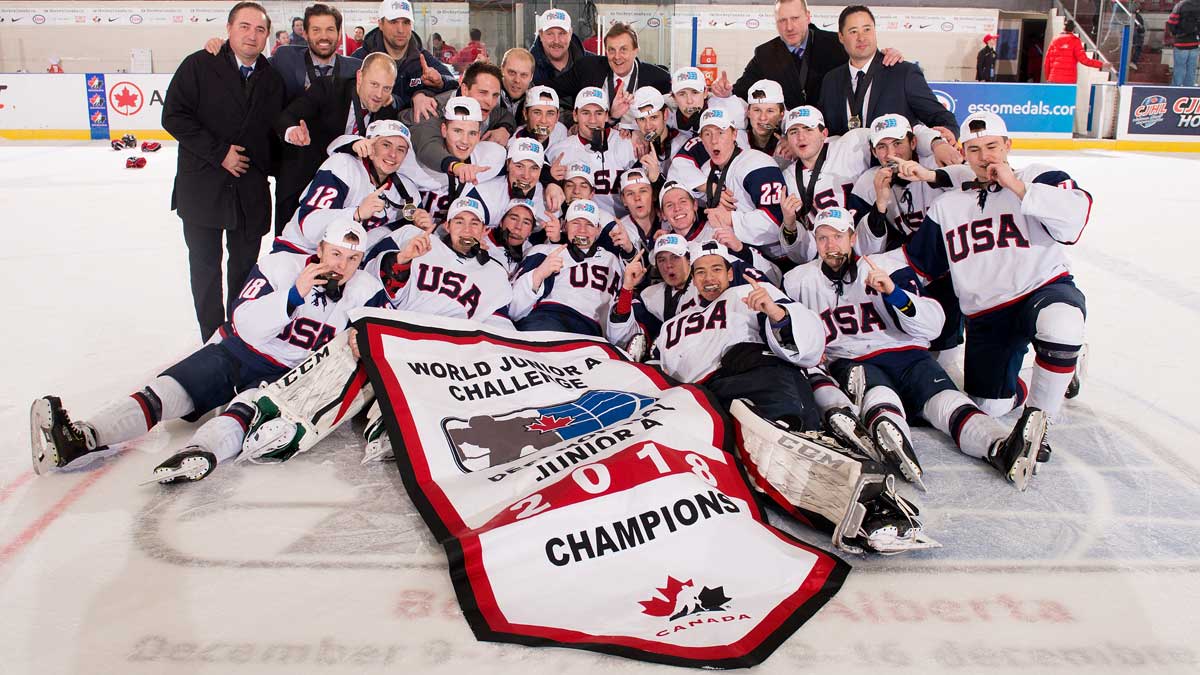 The 2018 edition of the World Junior A Challenge was held on December 9-16 in Bonnyville, Alberta with teams representing Canada East, Canada West, Czech Republic, Russia and the United States participating. The United States squad ended up taking home the gold after dispatching Russia in the gold medal game.

Here is a review of some draft eligible participants.

Brink entered the tournament red hot tearing up the USHL offensively and was a big time target for those attending this event in Western Canada to get a look at. He did not disappoint as he tied for the scoring lead and helped carry the Americans to the Gold. Brink is a speedy, fearless, hard-working forward with a knack for scoring. Combining excellent overall skating – speed, agility, mobility, technique – with a compete motor that never stops, with an excellent ability to find the back of the net, he has made himself one of the most intriguing players eligible for the upcoming 2019 NHL Draft.

Johnson had a strong tournament for the USA on the top defensive pairing. He showed the ability play a strong shut down D role. Johnson is an elite-skating defenseman. Johnson relies on his skating in all situations and to drive his play in all three zones. The University of Minnesota commit could play himself into an early second day draft selection if he continues to impress and can add some offense to his game. He could be one of the more underrated players and improved his draft stock immensely in this tournament.

Jones was the best puck rushing defenseman in the tournament and could really fly with the puck out of the zone. He could also make nice stretch passes, so defenses didn’t know if he was going to unload it or go for a skate. If there was no play there, he would just wire it off the glass to relieve pressure. Jones was a fixture on the US power play and finished the tournament with four points. He displayed excellent patience and poise with the puck and distributed it well. His playmaking skills and offensive talent were his strong suit, but he also held up well in his own zone defensively.

Saville put up some excellent numbers in net for the Americans and was a big reason for the team’s success. An average sized goalie who moves very well in the net, shows solid athleticism, flexibility and reads the play ahead of him well. While Saville is very quick in moving post-to-post, his game mostly revolves around his positioning and ability to square up to the shooter. The University of Nebraska-Omaha commit had a very strong tournament for the United States and increased his draft stock with his performance.

Podkolzin was the best player on the ice by a landslide. He tied for first in tournament scoring with eight points and was the straw that stirred the drink of the Russian attack. Podkolzin has ridiculous puck skills and very elusive movements, is a strong kid with a tons of lower body strength who just works his tail off. He is great at creating space for himself by rapidly changing speeds and backing up defenders. Podkolzin was a threat whenever he stepped on the ice and dictated the play displaying the elite offensive talent that he’s projected to be at the NH level.

Nikolaev was one of Russia’s best forward throughout the tournament. He demonstrated a litany of dangerous offensive tools such as creative passing ability, and excellent stickhandling skills as well as a solid 200 foot game. He surveys the ice well putting the puck right on his line mates tape and isn’t afraid to make no-look passes. He patrols the middle of the ice very well showing good scoring drive and a relentless effort level applying excellent pressure on the back check. Nikolaev was one of Russia’s most consistent offensive performers with six points during the tournament.

Gutik is a large forward with incredible hockey skills and fantastic hockey sense. In addition to his large frame he also has fantastic stickhandling skills and was incredibly difficult to defend against. He dictated the pace for most of Russia’s games this tournament. He had excellent chemistry with Vasily Podkolzin, which only made him more difficult to play against He displayed a high compete level throughout the tournament with excellent reads and decision-making. He is very noticeable out there and has good potential as a power forward in the NHL one day. Looked better in this tournament than in some club games this season as he was consistently engaged and showed a higher complete level. He is one to keep an eye on going forward.

Askarov is an exceptional goaltender who isn’t draft eligible until 2020. He was the best goaltender in the tournament by a landslide and absolutely robbed opponents of goals with his size, athleticism, and quickness. He utilizes his big body to get out aggressively, cut down the angle, and not give much net to shoot at. He has excellent mobility and is quick while on his pads, sliding across, and jumping back to his feet quickly. He is very calm playing the puck as well and doesn’t show signs of panic with fore checkers barreling in. There’s plenty to like about his game and he should be the top goaltender available and likely a first round selection in the 2020 NHL Draft.

Blaisdell was fantastic for Team Canada West and was the best performer on the team during the tournament. He was one of the fastest players on the ice with explosive skating speed as well as a dynamic first step. His wrist shot was stellar throughout the tournament, and he put on a snipe show. The release on his shot is nasty and he has an excellent curl n’ drag move that works its way into a shot off the toe of the stick. Blaisdell is an offensive dynamo when you combine his shot, puck skills, speed, and elusive movements. He recorded five points during the event and left a favorable impression during this event.

Newhook did not look out of place in the tournament, showing the ability to produce offense with his playmaking ability, but more was expected out of the talented forward. His shot was a disappointment as he rarely showed it and when he did several shots missed the net and the accuracy you typically see from him wasn’t there. Newhook is a highly skilled center who reads and anticipates the play extremely well. There were stretches of play in the tournament where Newhook would be somewhat unnoticeable, so there are definitely issues of consistency to hammer out, but the Boston College commit still looks like he has the skills to make an impact at the highest level one day.

Holloway was one of the most consistent and impactful forwards for Team Canada West throughout this tournament. Demonstrating good speed and mobility, two-way awareness, a very high compete level, and attention to the small details on the ice, he was very impressive all tournament long. The University of Wisconsin commit played with a high pace and was able to make plays and won most of his puck battles. A 2020 eligible looked like a first rounder here.

Blumel was the best second-time draft eligible player in the tournament. He drove most of the offense for the Czech Republic team during the tournament. He does a bit of everything to help his team with good speed, puck skills, and playmaking skills. Strong overall performance and likely a later round selection this time around.

Teply created some good scoring chances by jumping in quickly, grabbing the puck, and ripping shots. However, these plays were few and far between. Most of the time he was serviceable at best and had a very quiet. Despite to unimpressive turnout, there were flashes of brilliance and glimpses of a player with some nice skating, stick handling, and shooting ability. He is good at getting the puck in deep, hunting it down with his speed, and using his strength to win it. He moves well for a bigger player. He didn’t get much of an opportunity and was not on the power play for the Czechs which hurt his production.

Combine impressive skating with an extremely high compete level, and you get a player who can make a difference night in and night out. Beaton has a powerful skating stride and his low center of gravity makes it difficult to knock him off pucks. He still has room to build muscle on his frame, making him more difficult to play against. He sees the ice very well and has excellent passing ability. Dangerous on the rush, Beaton is able to get his shot off towards the net very quickly and efficiently but is more of a pass-first player. The RPI commit will need refinement on his raw puck skills moving forward, but his combination of skillset makes him the kind of player that coaches will love.