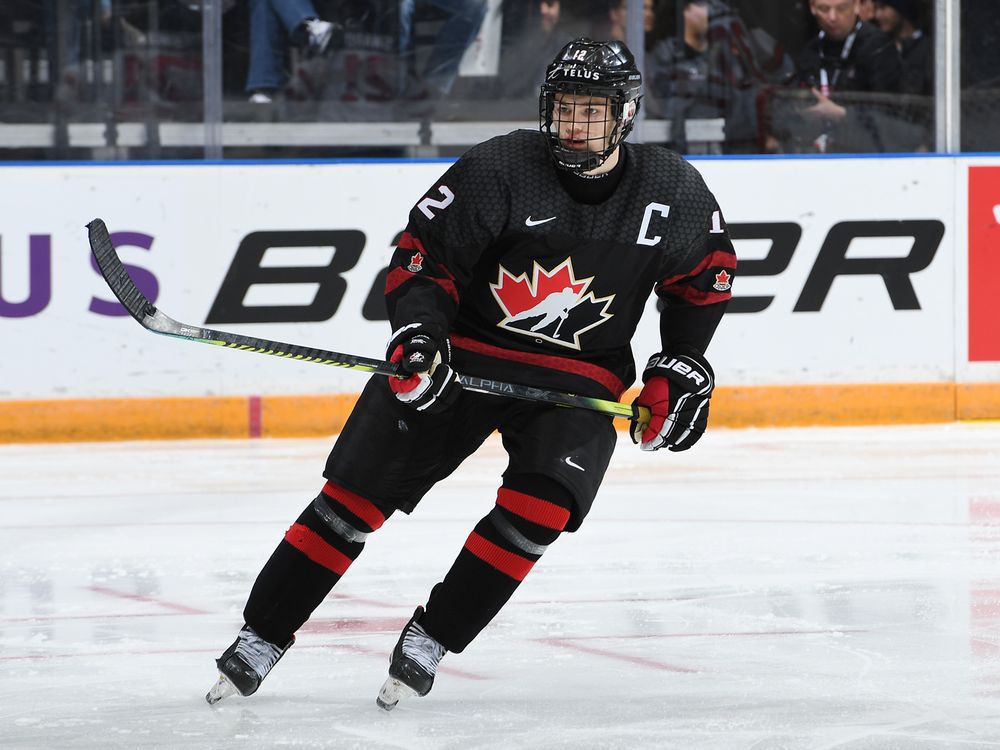 Shane Wright, a Canadian center for the Kingston Frontenacs in the Ontario Hockey League (OHL), tops our 2022 Preliminary DraftPro list of OHL prospects.

Wright (6 foot 1, 185 pounds), is the clear-cut favourite to be drafted first overall in the upcoming 2022 NHL Draft and for good reason. He was selected by Kingston first overall in the 2019 OHL Priority Selection Draft. Wright was granted exceptional-player status by the Canadian Hockey League (CHL) to play in the OHL as a 15-year-old. He became only the fifth OHL player to ever receive that honour, joining the likes of John Tavares, Aaron Ekblad, Sean Day and Connor McDavid.

What Wright did in his rookie 2019-20 season with Kingston was pretty remarkable. He averaged over a point per game, scoring 66 points (39 goals, 27 assists) in 58 games, which helped win him the CHL Rookie of the Year award. In 2020-21 he suited up for Team Canada as the captain at the U18 IIHF World Junior Championships where he absolutely dominated. He put up 14 points (nine goals, five assists) in five games on his way to lead the entire tournament in points per game (2.80), along with capturing the gold medal.

Speaking with DraftPro Scout Matt Morrison about Shane Wright he had nothing but good things to say about the highly touted prospect, “Shane is an elite offensive center that plays a cerebral two-way game. His hard working effort, mixed with his crazy skill, allows him to take over and be the best player on the ice. A strong skater with quick hands and an elite release. Shane projects as a number one center and really is a franchise changing player.”

It’s pretty clear that Shane Wright is on everyone’s radar to watch this season in the OHL. There are however a lot of other exciting 2022 NHL Draft eligible prospects to watch for. This includes North Bay Battalion defenseman, Ty Nelson (CAN), Niagara Icedogs center, Pano Fimis (CAN), Sarnia Sting center, Maxim Namestnikov (RUS), and Soo Greyhounds center, Bryce McConnell-Barker (CAN), who were the top four draft picks from last year’s 2020 OHL Priority Selection Draft.

Nelson (5-10, 197), “is a mobile right-shot defender that adds an offensive flair to the game,” says Morrison. In 2019-20, Nelson played for the Toronto Junior Canadiens in the Greater Toronto Hockey League (GTHL) for the U16 Team, where he tallied 32 points (11 goals, 21 assists) in 33 games. Pretty impressive for a defenseman, as the 32 points were good enough for third in scoring on the team. This clearly caught the attention of the North Bay Battalion who took Nelson first overall in the first round of the 2020 OHL Priority Selection Draft.

Morrison added, “He is an elite skater and really does most of his work on his edges. Ty is playing his best hockey when he is attacking up the ice and breaking the puck out with his feet. Once joined in the rush, he possesses offensive talent that allows him to attack the net. He is primed for a solid year in North Bay, where he will be relied upon heavily to create offense from the back end.”

Fimis (5-11, 157), like Nelson, played for the Toronto Junior Canadiens U16 Team in the GTHL in 2019-20. He had an excellent season for them where he led the team in points by averaging over a point per game, scoring 42 points (14 goals, 28 assists) in 32 games. He was taken right after fellow Junior Canadiens teammate, Ty Nelson, in the 2020 OHL Priority Selection Draft by the Niagara Ice Dogs who chose Fimis second overall in the first round.

Speaking with Morrison, he said some impressive things to say about Fimis, “Pano is an exceptional two-way player that lives and dies in his work ethic. A great leader that wears a letter at every level. He is strong in the faceoff circle and reliable defensively for his age. Certainly has shut down capabilities but also brings some offensive talent as well. He reminds me of a mini Patrice Bergeron because of his IQ and defensive awareness.”

Namestnikov (5-7, 173), “is a skilled offensive forward with a creative finesse game,” says Morisson. In 2019-20 Namestnikov played in the High Performance Hockey League (HPHL) for the Honeybaked 15U AAA Team. He put up some stellar numbers posting 128 points (53 goals, 75 assists) in 59 games, good enough for fourth in points in the league. This helped him get drafted third overall by the Sarnia Sting in the 2020 OHL Priority Selection Draft. He is also the younger brother of NHL player Vladislav Namestnikov who currently plays for the Detroit Red Wings.

Morrison added a few more things about the talented prospect, “He plays a bit on the outside but when he attacks inside, he can be a game changer. Namestnikov has super slick hands at top speed and the edge work to play in small areas with the puck. He is not afraid to attack in transition one on one and is a power play threat because of his quick release.”

McConnell-Barker (6-1, 188), is a left-handed center who played for the London Junior Knights U16 AAA Team in the Alliance U16 League in 2019-20. In 33 games with London he scored 48 points (29 goals, 19 assists), which helped him win the Alliance Player of the Year award, an award that current NHL players, Bo Horvat, Travis Konecny and Nick Suzuki had previously won when they played in the league. The Soo Greyhounds decided McConnell-Barker was the player they were going to take at the 2020 OHL Priority Selection Draft and drafted him fourth overall in the first round.

Morrison, when asked about McConnell-Barker, seemed to really like the prospect, saying, “He is a big offensive forward with a strong two-way ability. While he is a dangerous offensive weapon with a combination of size and skill, he has really shown the ability to shut down top lines as well. I love the way he attacks with speed in transition and is more than a shooting threat. He projects as a top six forward that can fit into a number of different roles because of his ability to adapt.”

These four high draft picks from the 2020 OHL Priority Selection Draft will be players to really keep an eye on during the upcoming OHL season. Another two prospects to watch for are a couple of players who were both born in Moscow, Russia. Guelph Storm center, Danny Zhilkin, and Saginaw Spirit defenseman, Pavel Mintyukov.

Zhilkin (6-2, 185), “is an offensive center that plays with an edge,” says Morrison. Zhilkin was drafted 14th overall in 2019 by the Guelph Storm in the OHL Priority Selection Draft. He was the youngest born 2003 rookie in the OHL in the 2019-20 season where he contributed with 15 points (seven goals, eight assists) in 60 games for the Storm. Originally born in Russia, he and his family immigrated to Canada when he was six years old, making him eligible to play for Team Canada at the 2020-21 U18 IIHF World Junior Championships. He recorded two points (two assists) over seven games in the tournament and won a gold medal.

Morrison went on to add, “He is certainly a prospect I have some love for because of his battle level and motor. When you can take a kid with the offensive flair and talent he has and add that annoying grit that a Tkachuk provides, it makes a dangerous package. He is not afraid to take over a game with his individual skill and can score from in tight or distance with a quick release. Look for Zhilkin to be a player that rises in the draft once the OHL season starts.”

Mintyukov (6-2, 195), is a left-handed defenseman who played for his hometown team, the MHK Dynamo Moskva in the Russian Junior League (MHL) in 2019-20. During that season with Dynamo he registered three points (one goal, two assists) in 33 games. He also suited up for Team Russia in the 2019-20 World U17 Hockey Challenge. He led the team in points for defensemen with five points (five assists) in six games, while also taking home a gold medal. Mintyukov was selected 52nd overall in the first round of the 2020 CHL Import Draft by the Saginaw Spirit where he will play this season.

Morrison gave some high praise to Mintyukov, saying, “He is a big mobile Russian defender that provides skill and agility from the back end. He plays a fast tempo game and is always moving his feet. Mintyukov should adapt to North America quickly because of his offensive IQ. He projects as a middle pairing defender that can play the game in both ends with speed and control.”

These are seven OHL prospects that should make some noise this season as they look to hear their names called at the 2022 NHL Draft. Rounding out the ten OHL prospects to watch for this season are three players that could all be risers in the draft rankings once the OHL season begins. They are London Knights center Ben Bujold (CAN), Owen Sound Attack center Cedrick Guindon (CAN), and Barrie Colts center Hunter Haight (CAN).

Bujold (5-11, 175), played the 2019-20 season with the Kanata Lasers U18 AAA Team in the Hockey Eastern Ontario (HEO) U18 League where he had a solid season, posting 55 points (18 goals, 37 assists) in 43 games. These numbers were good enough to get him some attention from the Hunters, as the London Knights selected him with the 19th overall pick in the first round of the 2020 OHL Priority Draft.

Morrison seemed to like Bujold’s game, saying, “He is an offensively gifted forward with high end vision. Bujold sees the ice really well and can find teammates through tight seams. He’s not shy to make flashy plays under pressure, showing his creative IQ. A strong skater that should only improve as he adds strength.”

Guindon (5-11, 163), “is a competitive athletic forward with a high motor and passion for the game,” says Morrison. Guindon suited up in the 2019-20 season for the Rockland Nationals U18 AAA Team in the HEO U18 League. He put up some impressive numbers, tallying 59 points (24 goals, 35 assists) in 41 games. These numbers helped him win the 2019-20 HEO Player of the Year award, an award previously won in 2018-19 by Mason McTavish, who was drafted third overall by the Anaheim Ducks in the first round of the 2021 NHL Draft.

“Guindon is great in the locker room and gym as he displays a high work ethic every day and a very professional attitude. He has the offensive talent to score and play-make for others. Excels using his speed on the forecheck to disrupt play and cause turnovers. Responsible defensively with a high battle level,” added Morrison.

Haight (5-10, 167), played the 2019-20 season with the Elgin Middlesex Chiefs U16 AAA Team in the Alliance U16 League where he put up 58 points (32 goals, 26 assists) in 33 games. His 32 goals gave him top honours for most goals in the league. He continued his regular season success in a long playoff run, taking second for most points in the playoffs, scoring 26 points (11 goals, 15 assists) in 16 games, en-route to winning the Alliance Championship.

Morrison spoke very highly when asked about Haight, saying, “Hunter is a mobile right shot center poised to break out in the OHL this year. He has quick hands and can elevate the puck in a hurry, allowing him to score from the crease area. Haight also has one on one skills that can burn you with speed. He projects as a top six center that can provide offense through his speed and IQ. I have Haight as a first round talent and expect him to rise on the draft lists once the season starts.”

For more on the OHL prospects and the 2022 draft class be sure to pick up a copy of our 2022 Draft Preview Magazine available this fall.